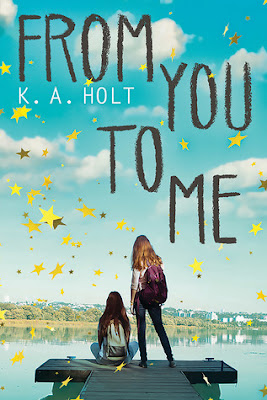 ABOUT THE BOOK {from Goodreads}:
Amelia Peabody lives in a small town where nothing changes. And that's just fine by her. After losing her big sister, Clara, a few years ago, Amelia can't handle any more change. But when she starts eighth grade, she accidentally receives a letter that Clara had written to herself. In it, there's a list of things she'd wanted to do before the end of middle school and never finished, like get on the softball team and throw an awesome birthday party on the lake.

Amelia wonders if it's a sign from Clara. Maybe if she completed the list, her heart would stop hurting so much, and she could go back to being her old self. But as she makes her way through, Amelia finds that there's no going back, only forward. And she realizes she'll have to put her own spin on Clara's list to grow and change in the ways she needs to.

K. A. Holt's beautiful new novel is about grieving and growing up, and the ripples loss creates for a girl, a family, and a community.

Kari Anne Holt is the author of several middle grade novels in verse including House Arrest (Chronicle), a Bank Street Best Book of the Year 2015, and Rhyme Schemer (Chronicle), an Amazon Best Book for Kids and Teens, and a Bank Street Best Book of the Year. Her novel in haiku, Brains for Lunch, was highlighted on the Texas Library Association’s Annotated Lone Star Reading List for 2011. She is also the author of Gnome-a-geddon, Red Moon Rising, and Mike Stellar: Nerves of Steel, a nominee for the 2014 Connecticut Library Association Nutmeg Book Award and the 2013 Maud Hart Lovelace Award. Kari lives in Austin, TX .

REVIEW:
This story deals with the loss of an older sibling through an accident, grief, guilt, loneliness, and profound sadness. It also deals with healing through the love, patience, and support of family and friends.

The book reminds me of the themes portrayed in the 1981 Academy-award winning film, 'Ordinary People' starring Mary Tyler Moore, Donald Sutherland, and Timothy Hutton. It also shares many of its themes with a Christian fiction novel by the fine author, Karen Kingsbury, 'Waiting for Morning:  Forever Faithful #1'. I sincerely enjoyed all three of these works.


Mrs. Henderson, the homeroom teacher, sets out the letters written on the first day of sixth grade on each student's new desk on their first day of eighth grade. Somehow Mrs. Henderson places the letter written by Amelia Peabody's deceased sister, Clara, on Amelia's desk.

Amelia is surprised when she finds Clara's letter instead of her own, but she decides maybe Clara is trying to communicate with her after three years. Clara has written a list of five goals she wanted to accomplish in eighth grade, one of which is to be nicer to Amelia and their mother.

Amelia and her best friend, Taylor Grant, decide Amelia must complete her sister's goals by the end of the school year. Taylor takes over control of Amelia's activities and really pushes for Amelia to work on reaching Clara's goals.

Much of the story is devoted to Amelia's feelings of guilt, unworthiness, loneliness, and sadness. The rest tells us how Amelia works to accomplish the goals. The pacing is excellent throughout the story and is perfect for middle-grade readers.

The supporting characters of Taylor Grant, Twitch {aka Billy}, four of Clara's friends, Mrs. Grant {Taylor's grandmother}, and Amelia's parents are well-developed and varied. The local lake becomes a significant character as the story builds.

These strong characters and the support system they provide to Amelia make all the difference for the main character's progression through grief.

Without spoiling the ending for you, I do want to share with you that the ending of this book is fabulous! When I was about halfway through the story I wondered how the author was going to complete the plot for readers. She didn't let readers down. K.A. Holt has written an awesome ending certain to satisfy young and old readers alike!

Highly recommended as a read-aloud for school classes and families. This book is likely to become a favorite of fans of young people overcoming challenges, strong friendships, realistic family life, and characters with courage.