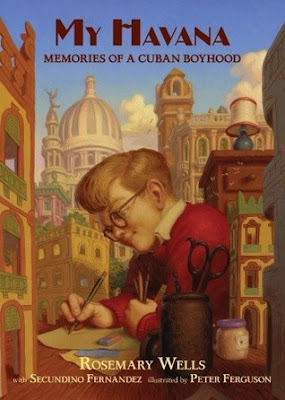 
A young Cuban immigrant eases his homesickness by re-creating the city of Havana in a poignant tale that will resonate with readers today.

"You’re always drawing in that notebook of yours," Dino’s friend teases. To the small boy, 1950s Havana is alive with color, music, and glamour, and he itches to capture it on paper. When Fidel Castro and the Communist Party take over the Cuban government, Dino’s family must move to New York, where the lonely boy pours his heart into making a model of Havana’s archways and balconies, buildings and streets. Rosemary Wells composes a tender ode to an immigrant boy who grew up to be a U.S. architect, while Peter Ferguson’s atmospheric paintings evoke two vibrant cities as they were half a century ago.


ABOUT THE AUTHOR {from Goodreads}:
Rosemary Wells is the author of a number of popular children's books, most notably the Max and Ruby series which follows the everyday adventures of sibling bunnies - curious three year old Max and bossy seven year old Ruby. She gets the inspiration for Max and Ruby from her two daughters and the experiences they have with friends and school. Her West Highland Terriers Lucy and Snowy have also worked their way into her books, as McDuff and insight for other characters. She has also written Noisy Nora, Yoko, Voyage to the Bunny Planet series, a Christmas Book called Morris's Disappearing Bag and a collected book of illustrations of Rodgers and Hammerstein songs.

In April 2007, her children's book The Gulps featuring illustrations by Marc Brown was released. Also that year she published Red Moon at Sharpsburg, a historical novel featuring a young girl in the American Civil War. 2008 brings Otto Runs For President, followed by Yoko Writes Her Name, scheduled to be published in July. Wells grew up in Red Bank, New Jersey. She is the daughter of Helen Bamberger.

ABOUT THE ILLUSTRATOR {from Goodreads}:
ILLUSTRATOR PETER FERGUSON'S WEBSITE

MY THOUGHTS:
When I saw this title in our library catalog as I searched for books written by one of my favorite children's authors, Rosemary Wells, I knew I wanted to read this story. I'm so glad I did because this is a well-written, engaging book featuring an interesting individual who grew up to be an architect.

The story begins in 1959 Havana, Cuba, when the subject, who is also the narrator of the story, was eleven years old. Fidel Castro is on the television screen and Secundino's father predicts "he will be another dictator, much worse than the last one."

On the next page the reader finds a chapter entitled, 'Havana, 1952-1954'. In this chapter the narrator {Secundino} shares about his childhood in downtown Havana. His nickname is 'Dino'. He describes his family life and school life in great detail which provides young readers with an excellent background for what unfolds later on in the book.

Dino shares how he began drawing buildings when he was just old enough to hold a pencil. He is fascinated by doorways, windows, and other features of Havana's old buildings. Dino is small for his age and he wears thick glasses. He is teased by his cousins because he consistently wants to be filling his sketchbooks with images of the things he sees around Havana.

In 1954, Dino and his parents sail on a steamship to Madrid to help a relative who was injured in an accident. Dino's mother, Mami, is thrilled to be going to Madrid because it is where her parents live. The little family is does not receive a warm welcome from the customs police.

When little Dino speaks up as the customs agents pilfer items from the Fernandez family's suitcases, he is whisked away to be strip searched. Later when he asks his father why the police were so mean and rude, Mr. Fernandez explains that these police officers are former soldiers of Spain's leader, Generalissimo Francisco Franco, from a 'long-ago war'.

Dino is very unhappy in Madrid. There are no flowers, palm trees, or ocean as in Havana. He stops drawing altogether. When his mother asks him what is wrong, he tells her people are not friendly in Madrid like they are in Havana. This opens up a long discussion about Hitler, Franco, dictators, oppression, etc. Hard lessons for a young boy to learn about and experience personally.

When the family is called back home to Cuba so the parents can resume running their restaurant in Havana, Dino begins to draw what he sees in Spain.

The next chapter is called 'Home, 1956-1959'. Once home, Dino resumes drawing the palaces of Havana. But the Fernandez family is forced to make yet another major change in their lives due to the violent threats of the president of Cuba, General Fulgencio Batista.

In the middle of the night on December 31st, 1958, Batista's regime is 'chased out of Cuba' by Fidel Castro. His parents and other relatives explain all of these events and their ramifications to young Dino, who trembles with fear as he tries to go to sleep.

The final chapter of the book is called, 'New York, 1959--'. Dino's parents make a plan to fly to Miami. They will then travel to New York City by train to work in a relative's restaurant. Before they leave Havana, Dino wants more than anything to say goodbye to the buildings of Havana.

Once they arrive in the United States, Dino hates American food and tells his parents he wants Cuban food. When they arrive in New Jersey, Dino is shocked and dismayed to find the trees there have no leaves, the temperature is colder than he's ever experienced, and it is 'sleeting'. Lots of unwelcome surprises for an eleven-year old.

Dino shares his experiences in public school in New York as a Spanish-speaker placed in an English-speaking classroom with readers. There are a lot of students from Puerto Rico in his class, but they were not helpful to Dino because they spoke a different kind of Spanish than he did.

As a retired teacher, I was sincerely pained to read about how this young man was treated by his teacher. Miss Neubold was unkind in her words and deeds.

Meanwhile, Dino is homesick for Havana. He tells his parents he wants to go home--to Cuba. His father tells him "Havana is in the hands of madmen. New York is our home now."

Dino describes for readers how he began to build a model of Havana on his bedroom floor. He paints a map of Havana on a large piece of plywood and cuts his favorite buildings out of cardboard. He paints everything using the bright colors of Havana. He uses fluorescent paint to fill each window, streetlight, and porthole of ships in his harbor. When Dino turns out his bedside lamp, his Havana glows like his former Cuban home.

In the closing paragraphs of the book, Dino's Tio Manuel takes Dino and his friend, John, to Coney Island. On the Parachute Jump ride Dino sees the white sand beach of Sheepshead Bay and realizes New York is almost like Havana.

The artwork in this book is exceptional as it enriches each element of the story being told by Rosemary Wells and Dino Fernandez. I really loved this book.

Highly-recommended for readers of all ages! Fans of Latin American and Cuban history, immigration history, architecture, and biographies will enjoy this book. Teachers and librarians may find this book a valuable addition to their social studies curriculum.

-- Monday, October 8th: SPECIAL EVENT! It's the five-year anniversary of the release of my first book, 'A Holiday Miracle in Apple Blossom'. Stop by for a chance to win an ebook copy of this award-winning holiday novella. Event hosted by Author June McCrary Jacobs. Prizes provided by Cedar Fort Publishing.