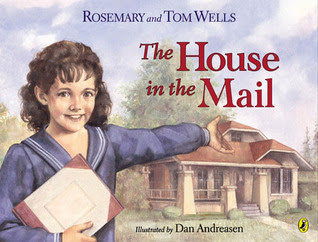 ABOUT THE BOOK {from Goodreads}:
In 1928, Emily's father brings home a book filled with pictures of houses made from kits, and she and her family can hardly decide which one to choose. Finally, Emily will be able to have her very own room, instead of sharing with her little brother. Detailed in scrapbook style, Rosemary and Tom Wells and Dan Andreasen have created a charming story with historical appeal that allows readers to follow the steps Emily and her family take as they design their new home.

ABOUT THE AUTHOR {from Goodreads}:
Rosemary Wells is the author of a number of popular children's books, most notably the Max and Ruby series which follows the everyday adventures of sibling bunnies - curious three year old Max and bossy seven year old Ruby. She gets the inspiration for Max and Ruby from her two daughters and the experiences they have with friends and school. Her West Highland Terriers Lucy and Snowy have also worked their way into her books, as McDuff and insight for other characters. She has also written Noisy Nora, Yoko, Voyage to the Bunny Planet series, a Christmas Book called Morris's Disappearing Bag and a collected book of illustrations of Rodgers and Hammerstein songs.

In April 2007, her children's book The Gulps featuring illustrations by Marc Brown was released. Also that year she published Red Moon at Sharpsburg, a historical novel featuring a young girl in the American Civil War. 2008 brings Otto Runs For President, followed by Yoko Writes Her Name, scheduled to be published in July.

Wells grew up in Red Bank, New Jersey. She is the daughter of Helen Bamberger.

MY THOUGHTS:
This story is set in 1927 on a farm in Enfield, Kentucky. The narrator is twelve-year old Emily Cartwright. Although the book is in picture book format, the library catalog record lists it as appropriate for Grades 2-5. The vocabulary and assorted opportunities to discuss historical facts from the early part of the twentieth century lead me to recommend this as a middle-grade book.

Tom Wells, Rosemary Wells's husband, was an architect. One of the highlights of the manuscript, in my opinion, is the S.T.E.A.M. education focus on engineering. In the book, the Cartwrights, along with help from their neighbors, build a house from the foundation up. The house is a bungalow kit purchased from Sears, Roebuck & Company for $2,500.00 in early 1927.

Mr. Cartwright and his neighbor, Will, worked on digging a big hole in the ground for the foundation. Then they used boulders out of the ground using two draft horses. The boulders were then split up to make the foundation walls and used mortar to fill the spaces in-between the rock pieces.

When the train hauling their house was scheduled to arrive, many  townspeople waited at the railroad station to see the order from Sears, Roebuck & Company pull in. Emily reports that it took three trips in her grandfather's old pickup truck to haul the entire load back to the farm.

Emily continues to report how the walls are raised upright and how she helped by reading the measurements off of the blueprints outloud to her father and neighbor so they could work continuously.

In between reporting the progress on the assembly of the house, Emily shares about the town's Fourth of July celebration. At this point in the story, Emily mentions that their neighbor Will served in 'The Great War'. This would be an excellent gateway to a discussion about America's role in World War I.

Later in the story Emily gives us a blow-by-blow report of how the roof is applied to the house. I wasn't surprised to learn roofs are assembled the same way now as they were back then except back then roofers didn't have staple and nail guns to ease and speed up their work!

After the children had returned to school in early September, the men began working on the interior of the home. Emily's enthusiasm in reporting about the plumbing, electrical, coal-burning furnace and ductwork, plaster walls, yellow pine floor boards, and kitchen linoleum {as written by Rosemary Wells} is contagious.

The book is formatted like an old-time scrapbook with images of old advertisements for ice boxes, houses, washing machines, and cook stoves and other period ephemera scattered among hand-drawings supposedly made by Emily. I felt these visual details add to the whimsy and fun of this book.

Highly-recommended to teachers, parents/grandparents, librarians, museum docents; and fans of Americana, architecture, home appliances. Also, I think fans of the post-World War I to World War II era of American history would enjoy a tween's take on society and industrialization as Emily is fascinated with indoor plumbing, heating, and electricity.

--  Monday, September 17th:  My Marvelous Middle-Grade Monday post will feature a pair of Do-It-Yourself, hands-on, S.T.E.A.M. education books for middle-graders. The books are from a series named 'Super Skills' written by author Stephanie Turnbull. In this post I'll be highlighting and reviewing two related titles from the series, 'Craft Skills' and 'Art Skills'.