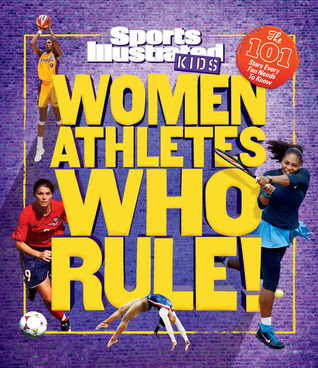 The fifth book in the Big Book of Who series from Sports Illustrated Kids profiles extraordinary athletes who shaped the narratives of their sports. The best women athletes--past and present--including Billie Jean King, Serena Williams, Nadia Comaneci, Simone Biles, and dozens more are grouped into these categories: Superstars who reinvented what it means to be a sports celebrity, Wonder Women who transcend sports and created seismic shifts in our culture, Trail Blazers who broke barriers and paved the way for others to follow, Record Breakers who set new standards for excellence, and the Champions who showed heart and gumption as winners. All of their stories bring excellence in women's sports to readers hungry for empowering stories for kids--girls and boys alike.

I have followed the sports of ice skating, tennis, and baseball since the 1970s, and in the 1980s I began following professional golf. So when I saw this book on the new book shelf in the children's section of the local public library, I grabbed it. I'm so glad I did!

This book is well-formatted with awesome photographs of these athletes in action, a nice-sized font, text set aside in easy-to-read boxes, and a 'Fast Fact' or 'WOW Factor' for each of the 101 women athletes presented in the book. The photographs really are spectacular. Many of them are in black and white because of the era in which they were taken.

As mentioned in the blurb about the book from Goodreads at the beginning of this post, the book is divided into five sections. There is a 'Player Index' in the back matter of the book. Each athlete's name is shown as last name, first name {i.e. Lopez, Nancy} making it easy for readers to find their favorite athletes quickly.

I learned about women athletes from sports I don't follow and about the little-known-to-me sports some of them have participated in over the years. Some of the sports covered in the book include bowling, track and field, auto racing, softball, tennis, golf, ice skating, snow skiing, ice hockey, polo, soccer, and basketball.

My favorite features in the book were the ones about inspirational women who overcame tremendous obstacles to become champions in one or more sports.

I'd like to mention a unique individual who was rightfully included in this book. Eunice Kennedy Shriver founded the Special Olympics in 1962 by holding a summer camp for young people with intellectual disabilities. The movement now includes almost five million athletes--aged eight years old to adults--in 172 countries. Mrs. Shriver is included in the chapter titled, 'Trailblazers', along with Wilma Rudolph, Althea Gibson, and the first woman to reach the summit of Mount Everest {Junko Tabei}.

*************
Highly-recommended for readers of any age or gender who are interested in learning the history of global sports and iconic female sports heroes!

IF YOU HAVE A MIDDLE-GRADER/TWEEN/TEEN WHO IS INTERESTED IN LEARNING TO SEW AND QUILT, YOU'LL DEFINITELY WANT TO ENTER THE RAFFLECOPTER FOR ONE PRINT COPY OF 'SEWING SCHOOL QUILTS' TO A LUCKY US/CANADA WINNER. GIVEAWAY IS SPONSORED BY STOREY PUBLISHING.

LINK TO THE CURRENT GIVEAWAYS PAGE ON 'READING, WRITING & STITCH-METIC'