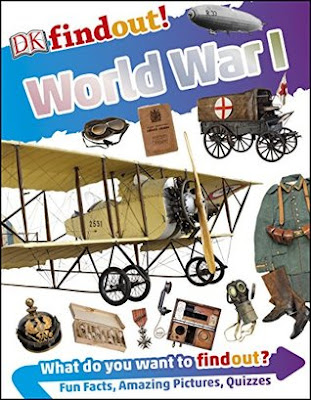 Celebrating the 100th anniversary of the end of WWI, Findout! dicusses the build-up to the war, along with battles, history, technology, and more.

Explore pre-war Europe, the US's entry into World War I, the role of women during the War, the technology developed, tanks and artillery, intelligence, espionage, propaganda, and much more. Become an expert on World War I and learn all about the key events that would shape the world. Read about the conditions that made a world war inevitable, and who the key players were. Written by an expert in the field, DK findout! World War I is a perfect addition to any home, school, or classroom library.


MY THOUGHTS:
As I continue my November MMGM theme on the history about World War I and World War II, I am pleased to present an informative, engaging, and appealing book from DK Publishing, an imprint of Penguin Random House. This title is part of the 'findout!' series by the publisher.

I am interested in learning about World War I for two reasons -- I am fascinated by American History from the late nineteenth century through the mid-twentieth century -and- my grandfather was a veteran of World War I. He served in the U.S. Army and was proud to tell us about his military service. Although he did not see combat, he felt he made a useful contribution to the cause by being a cook for the troops at a base camp in the southern United States.

Now, my thoughts about this book. The information in this book is very well presented. The data is organized and is embellished with photographs, maps, diagrams, and sidebars filled with vocabulary words and interesting fingertip facts.

The front matter features a 'World War I Main Powers' map with the Allied Powers and Central Powers defined and detailed. I learned so much about the logistics of the war and who was fighting whom that I think I finally understand the entire political mess that became known as 'The Great War'.

The back matter in the book include a detailed Glossary, Index, and Timeline of World War I. Once again, this timeline sorts out facts previously presented in the text and is an excellent visual tool for learners of any age.

Four chapters, in particular, were of interest to me. 'War Horses', 'Trench Warfare', 'Wartime Intelligence', and 'Women in Wartime'. The horse chapter included details about how war horses were used in the cavalry, in battle, and to move supplies to the front. The chapter on intelligence showed photos and gave information on how dogs and pigeons carried messages for the troops since radios were too heavy to carry and there were no cell phones. {A fact that many young people born in this new millenium will be shocked to learn!}

I had heard the term 'trench warfare' before, but I never understood the concept until I read this book with its carefully-labelled diagram listing each section of a Western Front trench, i.e. No Man's Land, Listening Post, Reserve Trench, Command Post, etc. I can't express in words how fascinating this entire strategy was to me.

Finally, as a woman, I enjoyed the 'Women in Wartime' chapter which featured the various ways in which women served during wartime by taking over jobs previously performed only by men. The list includes nurses, farm workers, ambulance drivers, factory workers, and bus conductors. Some nurses and ambulance drivers served near the battlefields.

The 'Spying' chapter should stir up some serious interest in young readers, too. It includes a recipe for invisible ink, a comparison of codes and ciphers {who knew?}, and how spies hid an escape kit in an ordinary-looking meat can. {See pages 28-29 if you want to know, too!}

For being about an horrific war, this was an enjoyable, informative read in my opinion.

*****Highly-recommended for fans of world/US/military history, teachers/librarians/parents/grandparents, veterans/military families, and readers of any age who are interested in learning something new about this significant war.

I borrowed this book from the non-fiction shelves in the children's section of the local public library.