For the Love of Laura Beth by Aubrey Wynne

The Korean War destroyed their plans, but the battle at home may shatter their hearts . . .

Laura Beth Walters fell in love with Joe McCall when she was six years old. Now she is counting the days until Joey graduates from college so they can marry and begin their life together. But the Korean War rips their neatly laid plans to shreds. Instead of a college fraternity, Joey joins a platoon. Laura Beth trades a traditional wedding for a quick trip to the courthouse.

The couple endure the hardship of separation, but the true battle is faced when Joey returns from the war. Their marriage is soon tested beyond endurance. Laura must find a way to accept the tragedy thrown in their path or lose the love that has kept them anchored for so long. With a determination that only comes from the heart, Joe relentlessly fights an invisible enemy . . . for the love of Laura Beth.

Praise for For the Love of Laura Beth:

~Warmth, compassion, heartache, faithfulness and more are emotions you will experience as you read this. I was completely immersed in this Korean War era tale, the historical details making the story come alive. Aubrey Wynne did an awesome job with this Historical book.
~Thank you Aubrey Wynne for a very beautifully written story!!
~An emotional read about the life, fears, and love during the Korean War! Aubrey Wynne begins each chapter with a thought-provoking quote. As a Midwesterner, who often visited Chicago in the 1950s, this romance includes well-researched historical details about Chicago, the era, and journalism. Aubrey Wynne blends history with a nicely paced full of family dynamics love story.

EXCERPT:
“Son, you’ve got some mail.”

The tone of his father’s voice sent a chill through Joey. He looked over his shoulder, straightened up, and smacked his head on the hood of the Crosley station wagon. Rubbing his scalp then wiping oily hands on his overalls, he took the envelope with an official-looking seal in the corner. Joe held it as if it were poison.

He shook his head, the pulse beating rapidly in his neck. With trembling fingers, he tore at the paper. The words blurred as he sunk onto the bumper of the pickup. “It’s a conscription notice,” he whispered, looking into his father’s terrified eyes. “I’m being drafted.”

“It’s my fault.” Max let out a moan and lowered himself onto the bumper. “If I hadn’t spent your college tuition, you’d be in school right now.”

“It’s nobody’s fault, Pa. You served your time, and now it’s my turn.” He waved the letter in the air. “Maybe we’ll end up with matching limps.” It was a bad attempt at humor, and he wanted to take the words back as soon as they left his mouth. Unlike many of his friends, Joe did not have any romantic ideas about soldiering. His father had been straight up with him about the horrors of war.

“I just pray you come back, boy, and you don’t have to live through what I did.” The lines on his father’s face seemed to have deepened in the last five minutes. He swiped his palms at his eyes and squeezed Joe’s arm. “When do you go?”

“It says I report for my physical January 2 at ten o’clock.” Maybe he wouldn’t see active combat. He wasn’t chicken, but his father still screamed at night once in awhile. His mother had said they were night terrors left over from WWII. “I do have a skill, Pa. I’m sure they need mechanics.”

“That’s true, son. Maybe they’ll have you keep those jeeps running for the generals.” He forced a chuckle. “Go on and get out of here now. It’s Friday night and you’ve got a purty little gal to take to the movie.”

An awkward silence ensued as both men stared at the floor. Laura Beth. How would he tell her? It was bad enough they had to postpone their wedding, but now this? It was just plain bad luck. And they’d all had enough of that for one year. The thought of the tears welling up in those clear, blue eyes made his blood cold. She’d been their pillar these past months, and now he would break her heart.

“I’ll get cleaned up, I guess.” Joe headed to the door then stopped. Without turning around he said, “She’s really gonna flip, Pa. I think telling her might be as hard as going.”

In a thick voice, Max tried to offer some comfort. “The only thing worse than war was losing your mother, but Laura Beth is a strong young woman and loyal as they come. She won’t give up on you, and it wouldn’t be fair not to let her know right away. So go on now and get ‘er done.”

Bestselling and award-winning author Aubrey Wynne resides in the Midwest with her husband, dogs, horses, mule, and barn cats. She is an elementary teacher by trade, champion of children and animals by conscience, and author by night.

In addition to her Chicago Christmas novellas, Aubrey will release two more Regency romances in 2019. Once Upon A Widow series will officially launch in March 2019, the Wicked Earls’ Club will release again just in time for the holidays.

$50 Blast Giveaway Winner’s choice of a $50 Amazon Gift Code or $50 in PayPal Cash Ends 1/2/19 Open only to those who can legally enter, receive and use an Amazon.com Gift Code or Paypal Cash. Winning Entry will be verified prior to prize being awarded. No purchase necessary. You must be 18 or older to enter or have your parent enter for you. The winner will be chosen by rafflecopter and announced here as well as emailed and will have 48 hours to respond or a new winner will be chosen. This giveaway is in no way associated with Facebook, Twitter, Rafflecopter or any other entity unless otherwise specified. The number of eligible entries received determines the odds of winning. The giveaway was organized by Kathy from I Am A Reader and sponsored by the author. VOID WHERE PROHIBITED BY LAW.


YOU ARE CORDIALLY INVITED TO A '12 DAYS OF CHRISTMAS' EVENT PRESENTED BY THE READERS & WRITERS OF CLEAN FICTION FACEBOOK GROUP. 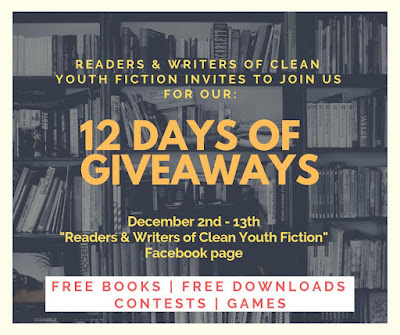 YOU'LL NEED TO PLAN AHEAD TO ATTEND BECAUSE YOU MUST BE A MEMBER OF THE CLOSED GROUP TO PARTICIPATE. HERE'S THE LINK TO THE PAGE SO YOU CAN SUBMIT YOUR ANSWERS TO THE MODERATOR'S THREE QUESTIONS AND BE APPROVED AHEAD OF TIME.  LINK TO READER & WRITERS OF CLEAN YOUTH FICTION FACEBOOK GROUP


🌲🌲🌲🌲📕📗📘📙📚 ~ I WILL BE THE FEATURED AUTHOR ON THE FINAL DAY OF THE EVENT, THIS THURSDAY, DECEMBER 13TH! PLEASE JOIN ME FOR SOME FUN ACTIVITIES AND SEVERAL AWESOME MIDDLE-GRADE & YOUNG ADULT FICTION BOOK PRIZES! I HOPE TO SEE YOU THERE. BEST WISHES, JUNE ~🌲🌲🌲🌲📕📗📘📙📚