Welcome to the Scavenger Blog Hunt and giveaway for the Garrison's Law contemporary romantic suspense series by Mary Connealy, hosted by JustRead Tours! At each stop, there will be:
Keep track of these clues each day because you'll need to enter the clues you've gathered that day in the Rafflecopter (a new entry each day for that day's clues). On the last day, the final piece of the scavenger hunt will be revealed in a puzzle on JustRead's (and JustCommonly's) blog. 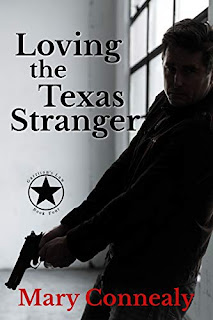 Title: Loving the Texas Stranger
Series: Garrison's Law, Book 4
Author: Mary Connealy
Release Date: December 6, 2018
Genre: Contemporary Romantic Suspense
An assassin takes a shot and hits two people with one bullet.
Natalie Brewster, a deep undercover agent for a group that doesn’t officially exist, saw the gunman aiming. He definitely waited, lined up the shot, and tried to kill both of them. Nat and Case Garrison hit the ground bleeding. They both come up shooting and kill the assassin—but that just makes him mad.

Now Case and Nat, who have never before met, have to figure out what they have in common to make them prey for a killer.

And they have to do it while running for their lives because, despite the two of them being highly skilled at keeping a low profile, the killer keeps finding them. They are running at break-neck speed, hiding with all the skill of long-time undercover agents, and falling in love with a passion that might be part of what brought a killer down on them.

Case didn’t need to be told to move this time. He grabbed her and she grabbed him and they dove behind a steel girder with such perfect synchronization that it could have been a ballet—except for the crash landing.

And the hail of bullets.

They both rolled as the girder in front of them and the wall behind them flashed sparks and echoed with the high, sharp whine of gunfire and ricocheting bullets.

Case knew now why the wall had exploded behind him when she first crashed into him. He also figured out she’d been trying to save his life even then. He had started a step behind but now he caught up fast. He towed her to her feet, doing his best to make his body thinner than the metal shield between them and their attacker. He locked his eyes on the exit sign right in front of them. A bullet screamed past them at an upward angle and he knew the man had shot from a lower angle, he’d dropped down onto the tracks.

Another train roared through the station and Case wished it would run the gunman over and solve their problem. But nothing in Case Garrison’s life had made him an optimist.

They didn’t even look at each other, they just snagged a handful of the person beside them, dove between the moving walls of the escalator and barreled up a flight of steps to the street.

Case, his fingers locked into the fabric of her shirt, looked around. They had the length of time it took a high-speed train to pass through a station to get out of the line of fire.

She growled, “Move,” again and his instincts, his best friend for a long time, told him to do what she said.

~BOOKS IN THIS SERIES~

Mary Connealy writes romantic comedy with cowboys always with a strong suspense thread. She is a two time Carol Award winner, and a Rita, Christy and Inspirational Reader’s Choice finalist. She is the bestselling author of over 50 books and novellas. Her most recent book series are: Garrison’s Law, High Sierra Sweethearts, Cimarron Legacy, Wild at Heart, Trouble in Texas, and Kincaid Bride for Bethany House Publishing. She’s also written four other series for Barbour Publishing and many novellas. Mary has nearly a million books in print.

(1) winner will receive:
Enter via the Rafflecopter giveaway below. A new entry option will be live each day for that day's clues. Giveaway begins at midnight on January 8, 2019 and lasts through 11:59pm January 15, 2018. Void where prohibited by law. Winners will be notified within a week of close of the giveaway and given 48 hours to respond or a new winner will be chosen. Giveaway is subject to the policies found here.

a Rafflecopter giveaway
Be sure to stop on every stop on the Tour Schedule for all the clues to enter!
Follow along at JustRead Tours for the full list of stops!