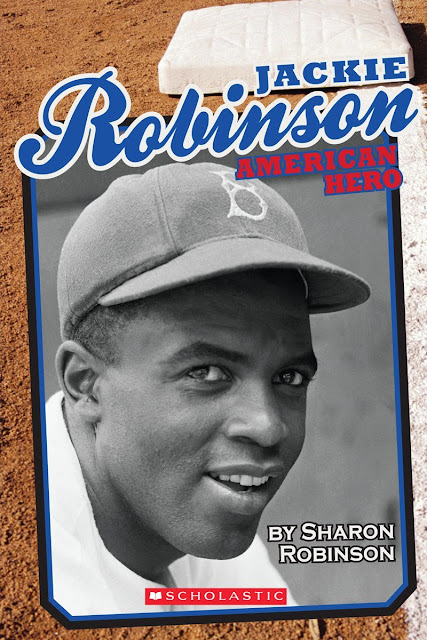 
ABOUT THE BOOK {FROM GOODREADS}:
To tie- in with the April 2013 release of the movie 42, the life story of Jackie Robinson, this full-color comprehensive biography will feature everything there is to know about this inspiring American hero. The movie, featuring high-profile actors such as Harrison Ford, Christopher Meloni, and T.R. Knight, explores Robinson's history-making signing with the Brooklyn Dodgers under the guidance of team executive Branch Rickey. The biography will explore what led up to Robinson's signing and what happened after. As the first black man to play major league baseball, his progress monumentally influenced the desegregation of baseball. Because of this, Robinson became an icon for not only the sport of baseball, but also for the civil -rights movement. Featuring photos throughout, this biography will be a sports tale and a history lesson. It will coincide with the movie and also provide many more Robinson details, introducing him to a new generation of readers.

Sharon Robinson has captivated readers with her memoir Stealing Home (Harper Collins Publishers, 1996), her recounting of growing up in the public eye, and Jackie's Nine (Scholastic, 2001), a book for young readers about the nine heartfelt, hard-won values that helped her father, Jackie Robinson, achieve his goals. Her photographic biography for children, Promises to Keep: How Jackie Robinson Changed America (Scholastic February 2004) received rave reviews. Her fiction novels include Safe At Home (Scholastic, 2006) and Slam Dunk! (Scholastic, 2007). Her first picture book, Testing the Ice: A True Story About Jackie Robinson (Scholastic, 2009) honors her extraordinary father's memory with her warm, graceful storytelling and illustrations by two-time Caldecott Honor Book artist, Kadir Nelson.

In addition to her writing career, Ms. Robinson is an educational consultant for Major League Baseball. In this capacity, she oversees school and community-based educational programs. Breaking Barriers, In Sports, In Life is the department's core program; it is a national character education program designed to empower students with strategies to help them face obstacles in their lives. The message is delivered by examining the values demonstrated in the lives of Jackie Robinson and many of today's baseball stars; since its inception in 1997, the program has reached over fourteen million children across the United States, Puerto Rico, and Canada.

Prior to joining Major League Baseball, Ms. Robinson had a 20-year career as a nurse-midwife and educator. She taught at such prestigious universities as Yale, Columbia, Howard and Georgetown. In addition to her work in midwifery, she directed the PUSH for Excellence program founded by Rev. Jesse L. Jackson from 1985 to 1990 and was a fund-raiser for The United Negro College Fund and A Better Chance.

Ms. Robinson is Vice Chairman of the Jackie Robinson Foundation and serves on the boards for the Roberto Clemente Sports City Complex in Carolina, PR, Metropolitan Opera, Urban America, and Omnicom Diversity Committee.

She lives in Apollo Beach, FL.

I have loved baseball since I was a girl. I am interested in history of all kinds -- including the history of baseball. This interest led me to attend a presentation in honor of the 50th anniversary of the date when Dodger Jackie Robinson broke the color barrier in 1947. {His first official game playing for the Brooklyn Dodgers was April 15, 1947.}

The presentation at a local university included speeches by one of Jackie's friends and teammates, Dodger pitcher Don Newcombe, and prize-winning author, Roger Kahn {Boys of Summer}. The evening was interesting and educational from an historical perspective, but I also enjoyed hearing these men talk about Jackie Robinson as a friend and individual. They shared many anecdotes which the small audience obviously appreciated.

I learned that this American icon was born on January 31, 1919, in a small cabin near Cairo, Georgia. Right then I promised myself I would post a Marvelous Middle-Grade Monday feature on the Monday closest to this centennial anniversary.

This book, written by Jackie's daughter, Sharon Robinson, is geared toward middle-grade students. The book is formatted into nine chapters highlighting different eras and facets of Jackie's life. A lot of black and white and color photographs are included in the book. Back matter includes a Glossary and Author Q & A.

In the Author Q & A, Sharon Robinson shares her father's motto:

"A life is not important except in the impact it has on others."

The Introduction in this book relates the story of how Jackie Robinson stole home in Game 1 of the 1955 World Series against the New York Yankees. It was a controversial play, but the author writes " . . . it illustrates Jackie's determination to win."

Two personal facts which caught my eye were that Jackie's father, Jerry Robinson, left the family when Jackie was only six months old. Second, Jackie's maternal grandparents had been enslaved and later became landowners of their own farm.

Jackie Robinson was a gifted athlete from the time he was a child. In high school he was the quarterback for his school's football team, top shooter in basketball, broad jumper in track, and tennis champion.

At Pasadena Junior College he successfully played baseball, track, and football. In February, 1939, he transferred to the University of California, Los Angeles, UCLA, where he became the first athlete to letter in four sports in the same season--track, baseball, football, and basketball.

The narrative follows Jackie's military service, baseball career, family life, and work in politics and the civil rights movement. He wrote books and columns, worked in television and radio, raised funds for the National Association for the Advancement of Colored People {NAACP} for their civil rights activities.

The author states that one of Jackie Robinson's biggest achievements was his induction into the Baseball Hall of Fame in 1962. He asked those who would be voting on the induction ballot to judge him on his career baseball statistics and not on the fact he broke the color barrier.

His plaque at the Baseball Hall of Fame now reads:

"Displayed tremendous courage and poise in 1947 when he integrated the modern major leagues in the face of intense adversity."

In 1997, Major League Baseball named April 15th Jackie Robinson Day and also retired his number 42 throughout every team in the league.

After he retired from baseball in 1957, Jackie Robinson was diagnosed with diabetes. He died at age fifty-three of a heart attack, but his legacy lives on through the Jackie Robinson Foundation which provides scholarships and leadership development to thousands of American youth.

This book was inspiring and moving.

I borrowed this book from biography shelf in the children's section of the local public library.