~ MMGM APOLLO 8 THE MISSION THAT CHANGED EVERYTHING ~ 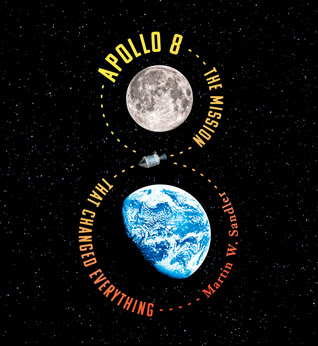 A nation in need of hope, the most powerful rocket ever launched, and the first three men to break the bounds of Earth: Apollo 8 was headed to the moon.

In 1957, when the USSR launched Sputnik I, the first man-made satellite to orbit Earth, America's rival in the Cold War claimed victory on a new frontier. The Space Race had begun, and the United States was losing. Closer to home, a decade of turbulence would soon have Americans reeling, with the year 1968 alone seeing the assassinations of Martin Luther King Jr. and Robert F. Kennedy as well as many violent clashes between police and protesters. Americans desperately needed something good to believe in, and NASA's mission to orbit Earth in Apollo 8 and test a lunar landing module was being planned for the end of the year. But with four months to go and the module behind schedule, the CIA discovered that the USSR was preparing to send its own mission around the moon -- another crucial victory in the Space Race -- and it was clearly time for a change of plan. In a volume full of astonishing full-color photographs, including the iconic Earthrise photo, Martin W. Sandler unfolds an incredible chapter in U.S. history: Apollo 8 wouldn't just orbit Earth, it would take American astronauts to see the dark side of the moon.

ABOUT THE AUTHOR {from Goodreads}:
Martin W. Sandler has written more than seventy books for children and adults and has written and produced seven television series. He has twice been nominated for the Pulitzer Prize and has won multiple Emmy Awards. He lives in Massachusetts.

This book includes all the elements that make up S.T.E.A.M. education!

Beginning with President John F. Kennedy's 'space race' speech before Congress on May 25, 1961, this book provides a thorough history of what was happening in America and around the globe in the 1950s and 1960s. It also includes a detailed history of space travel and rocket science. Biographies of space pioneers in the areas of engineering, rocketry, and space travel are included.

A narrative about what had happened in the United States in 1968 with the assassinations of Martin Luther King, Jr., and Robert F. Kennedy; the Tet Offensive in South Vietnam which killed four thousand American soldiers; and the violence betweeen protesters and law enforcement at the 1968 Democratic National Convention in Chicago stresses the traumas and tragedies the American people had suffered throughout this tubulent year.

These events set the foundation for readers to understand the importance and urgency of the Apollo 8 flight in late December, 1968. The Apollo 8 flight would be different from any other American or Russian manned spaceflights. It would be launched by the largest, most powerful rocket ever designed--Saturn V--and would attempt to become the first flight to allow humans to break free from Earth's force and head for the moon.

Readers are treated to a blow-by-blow chronology of the pre-flight, flight, and post-flight happenings for the Apollo 8 mission. In the 'Epilogue', the author gives an update of the American space program following this historic mission.

The back matter includes a very interesting section entitled, 'Life After Apollo 8', where portraits of the three crew members of Apollo 8 are presented along with their accomplishments after the space flight. Other back matter elements include: 'Source Notes', 'Bibliography', 'Index', and 'Acknowledgments'.

A highlight of the book for me was the stunning array of astonishing photographs taken by the crew members of Apollo 8 when they were in flight. The black & white and color photographs of the earth and the moon are spectacular! Most of them were shots I had never seen before. Even after I finished reading the book I looked at the photographs several more times. Wow!

There is a wide assortment of photos which young readers will find interesting and inspiring. Close-ups of the Saturn V rocket; interior and exterior shots of the Apollo 8 unit and the flight simulator used by the astronauts for training; in-flight photos of the astronauts; and color photos of the splashdown in the Pacific Ocean 1,000 miles southwest of Hawaii.

The book contains a lot of technical information and higher-level vocabulary and thinking skills, so I feel it may be more appropriate for upper middle-grade students.

Highly-recommended for readers of all ages who are fans of rocketry, space travel, US history, US space travel history, astronauts, astronomy, and photography!