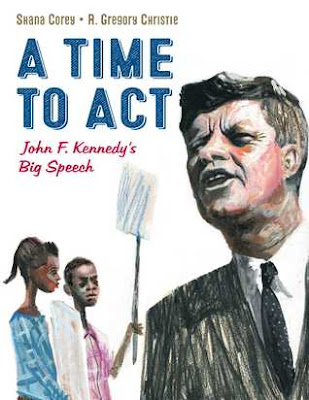 
ABOUT THE BOOK {FROM GOODREADS}:

From prominent leaders such as Martin Luther King, Jr. and Jackie Robinson to children and teenagers, it was the people speaking out and working for civil rights through sits-ins, freedom rides, and marches who led John F. Kennedy to take a stand.

This is the story of JFK—from his childhood to the events that led to his game-changing speech and the Civil Rights Act of 1964. Corey and Christie offer a deeply human look at our country’s thirty-fifth president, underscoring how each one of us, no matter who we are, have the power to make a difference.

With quotes from JFK’s speeches, detailed back matter, and a thought-provoking author’s note, this biography—in time for what would be JFK's 100th birthday—offers a sensitive look at a tumultuous time in history and compelling questions about effecting positive change today.

MY THOUGHTS:
I came across this book in the online library catalog after my friend told me her daughter was going on a Peace Corps mission to Southeast Asia for twenty-seven months. I realized I didn't know a lot about the organization, so I turned to the children's collection at the local public library for resources. This book came up on the search results, so I placed a hold on it, picked it up at the library, and read it.

This biography was not at all what I expected; but as so often happens in life, surprises are sometimes even better than what we were hoping for or seeking!

The first part of the book gives an overview of Kennedy's family background and upbringing, his schooldays as a boy, and his college experience. The book provides good detail on his military service in World War II including the PT 109 incident and the leadership and heroism Kennedy displayed when an enemy ship rammed into the boat under his command.

As the book progresses, details are shared about his political career as a Congressman and then Senator. I enjoyed the section about how he wrote Profiles in Courage while he was recovering from back surgery.

On January 2nd, 1960, Kennedy announced he was running for President of the United States. Famous Americans such as President Dwight D. Eisenhower and Eleanor Roosevelt were critical of Jack Kennedy and his family for various reasons.

Another obstacle stood in Kennedy's path to the presidency--he was Catholic, and many people felt America would not elect a Catholic as President. One quote by JFK included in the book was, "I believe in an America where religious intolerance will someday end."

The story continues with the retelling of various incidents of protests against segregation and discrimination followed by quotations from John F. Kennedy addressing the matters.

On November 8th, 1960, Kennedy was elected the thirty-fifth president of the United States by a very slim margin. Many black people had voted for him. He wanted his inauguration speech to be inspirational and meaningful to all Americans. He requested his speech writer to research Abraham Lincoln's Gettysburg Address.

On page 25, the first paragraph of the new president's speech is printed in a large font so it grabs the reader's attention.

The next section of the book delineates JFK's accomplishments during his short term in office:

President Kennedy did not take action, but others took action in the form of protests in Birmingham, Alabama, in 1963. In June, 1963, two black students applied to the University of Alabama, and the state's governor vowed to block the students' entrance into the university.

Finally, President Kennedy took strong action. He ordered the National Guard to escort the students safely into the school, and then that evening he spoke to the nation on television and on radio. Some of the text of the speech is printed in a large colored font on pages 36 and 37 of this book.

Dr. King and Jackie Robinson acknowledged the speech was one of the best presidential statements on the issue of human rights ever given.

The following week the president sent a civil rights bill to Congress. In August, 1963, after his 'I Have a Dream' speech, Dr. King and other leaders went to the White House to meet with President Kennedy.

Just a few months after his civil rights address to the nation, the president was assassinated.

A list of events which have subsequently happened around the world widely considered to be directly linked to President Kennedy's hard work include:


On July 2, 1964, the Civil Rights Act of 1964 was finally passed. The statute made it "illegal to discriminate in jobs based on the color of one's skin and providing for the integration of schools and public places."

At the close of the book, young readers are encouraged to "speak up, to act, to move the world forward--to make history."

Back matter includes an informative Author's Note with a lot of historical information about the Civil Rights Act, thumbnail biographies of some of the other people in the book entitled 'Who Are Some of the Other People in This Book?', 'For Further Reading' -- a list of books and online resources, 'Selected Bibliography', and 'Quotes Were Drawn From' list.

I borrowed this book from the children's non-fiction section in the local public library.