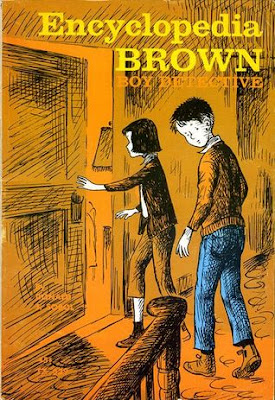 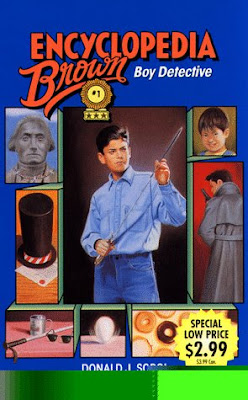 Cover on Edition I Read for This Post, 2002
ABOUT THE BOOK {from Goodreads}:
A Civil War sword...A watermelon stabbing...
Missing roller skates...
A trapeze artist's inheritance...
And an eyewitness who's legally blind!

Theses are just some of the ten brain-twisting mysteries that Encyclopedia Brown must solve by using his famous computer-like brain. Try to crack the cases along with him--the answer to all the mysteries are found in the back!


ABOUT THE AUTHOR {from Goodreads}:
Donald J. Sobol was an award-winning writer best known for his children's books, especially the Encyclopedia Brown mystery series. Mr. Sobol passed away in July of 2012.

MY THOUGHTS:
As I began working on my second book in my 'Tyler Stop' series, I realized I needed to do some research into what books my young protagonist, eleven-year-old Weston Gregg, would have been reading in the late 1960s.

I remembered that a number of the third grade boys I worked with as a teacher in the late 1980s loved the Nate the Great and the Encyclopedia Brown boy detective stories. Through my research I found that the Nate the Great series did not launch until 1972. Too late for my purposes for this project.

Through my research, I found that the first book in the Encylopedia Brown series, Boy Detective, was originally released in 1963--perfect timing for Weston's story. I requested the book from the library and read it the day after I checked it out of the library.

It was immediately apparent to me why Mr. Sobol's books were so appealing to youngsters. The book is actually made up of ten 'cases' which range in length from four to eight pages long and include illustrations by Leonard Shortall.

Ten-year-old Leroy 'Encyclopedia' Brown solves these cases for his father who is the chief of police for their hometown of Idaville. The main character is only called Leroy by his parents and his teachers. Everyone else calls the ten-year-old 'Encylopedia' because his brain is filled with facts and information he had learned from reading books.

After his success at helping his father, Mrs. Brown suggests that maybe Leroy will be a detective when he grows up. Her comments inspire her son, and Encyclopedia decides to open his own detective agency so he can help people solve their problems. He christens his agency, Brown Detective Agency, and advertises his services around the neighborhood with handbills he prints himself on his toy printing press and a hand-lettered sign posted on the family's garage.

I loved the sign he made up {page 16--paraphrased} because it is quaint and straighforward:

BROWN DETECTIVE AGENCY . . .
No case too small
25¢ per day
plus expenses

Some of the characters in the various stories are the same core of neighborhood kids and school friends, but all of the cases involve different mysteries. The facts are presented for each case, and at the conclusion of the chapter Encyclopedia Brown announces, "I know who . . ." or "I know what . . . " In all caps a query is typed below the chapter asking readers how Encyclopedia had figured out the case. At the lower edge of the same page readers are guided to a page in the appendix of the book where they can go to read the solution for the case.

As I read through the cases in this book I had fun trying to figure out not only who had committed the misdeed but how Encyclopedia Brown had figured out the puzzle. To be completely transparent, I was not always correct in my hypothesis of what tipped off Encyclopedia to the solution.

As I read through the ten cases in this book my admiration for the author's ability to be succinct, clever, engaging, and appealing to middle-grade readers grew exponentially. Mr. Sobol wrote twenty-eight Encyclopedia Brown books.

I read in his online obituary in the New York Times from July, 2012, that this Boy Detective book was rejected by two dozen publishers before being accepted for publication. In 1976 he won an Edgar Award from the Mystery Writers of America for this series. He wrote eighty books in total.

I will read as many of this little gems as I can get my hands on, not for the sole purpose of research for my own writing, but for the pure enjoyment I feel from reading about the adventures of such a fun character.

Highly-recommended to fans of retro fiction, detective novels for kids, and historical fiction. I believe these books would be great classroom or library read-alouds because they can fill those few 'down-time' minutes each day when a teacher works to keep his/her students on-task and mentally active when perhaps there isn't time to read an entire chapter from a commonly-formatted novel.