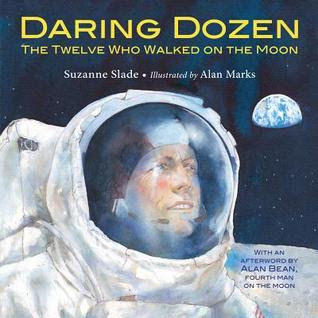 An introduction to the twelve men who have left footprints on the moon, just in time to celebrate the fiftieth anniversary of the first lunar landing.

On July 20, 1969, Neil Armstrong took one small step and made history. Over the course of the next three-and-a-half years, twelve lunar explorers, including Alan Shepard and Gene Cernan, touched down on the moon's surface. Author and engineer Suzanne Slade reveals how the Apollo missions (1969-1972) built upon one another and led to important discoveries about our nearest neighbor in space. Back matter includes an afterword by Alan Bean (1932-2018), the fourth person to walk on the moon.

Award-winning author of more than 100 books for chlldren.

MY THOUGHTS:
This hardcover non-fiction book is in a picture book format for pages 2 - 33. The illustrations are beautiful and they support the text well.

The text of the book is not rhyming and contains lots of factual information which will appeal to middle-grade learners. The book is formatted in chronological order for the following Apollo missions:  11, 12, 13, 14, 15, 16, and 17. At least one accomplishment for each moon landing is listed on the respective mission's pages.

I was pleased that the Apollo 13 mission, which was unable to land on the moon due to equipment failure, was included in the lineup so learners can read that not all 'scientific experiments' are successful.

The back matter for the book is extensive and includes many color photographs. Here are some of the topics included:


This will be an exciting read for students interested in space,  science, astronomy, NASA's history, US history, astronauts, and the moon walks. Highly recommended!

I borrowed this book from the new books shelves in the local public library's children's section.