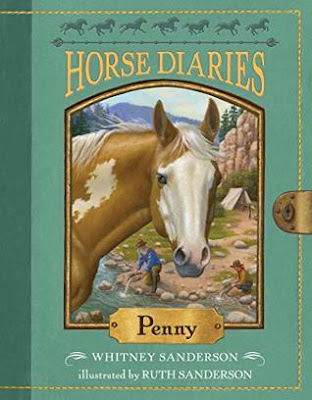 For all lovers of horses and history! In the latest book in the Horse Diaries series, meet Penny, a blue-eyed palomino paint mare who grows up in the Wild West of California during the Gold Rush!

CALIFORNIA, 1850. Penny is a blue-eyed palomino paint mare with a taste for adventure! She and a boy named Jesse search for gold in the hills of Northern California. After striking it rich and then losing everything, Jesse and Penny join the Pony Express. The job is a tough one, but Penny loves a challenge! Here is Penny's story . . . in her own words.

MY THOUGHTS:
As a middle-grade reader, I adored horse stories. Some of my favorites were by famed author Marguerite Henry:  Misty of Chincoteague; Stormy: Misty's Foal; Brighty of the Grand Canyon; and King of the Wind. When I saw this book, Penny, which combines my love of California history with a story about a horse, I was sold.

This book covers many years and many events in California's history. The narrator of the story is a Palomino mare owned by the main character, Jesse, and his grandfather, Buckeye Jack. The story opens in 1853 when the three of them arrive in the Sierra Nevada foothills after they split off from their wagon train. Jesse is a nine-year-old orphan whose parents died of cholera on the wagon train trail a few months ago.

At this point in the story, the horse has no name. Buckeye Jack encourages Jesse to choose a name for their new horse. Jesse tries out the names of Buttercup, Duchess, and Sunshine, but none of them sound right to him. Later on in the story Jesse christens the mare 'Penny' when she saves them from an undesirable situation.

Jesse and Buckeye Jack work in the gold fields and are swindled by the merchants selling supplies and by a gambler who comes into their camp one evening to play cards with the grandfather. Unfortunately, Buckeye Jack loses the mare in a card game. Jesse is understandably upset, but things work out in the end.

Penny makes her way back to the two gold miners. Jesse's historical adventures continue when he joins the Pony Express in 1860 at age sixteen. This part of the book was filled with action and was really fun to read.

When the Pony Express closes in late 1861, Jesse and Penny join the railroad and work laying track for the Transcontinental Railroad over the Sierra Nevada mountains. The author's description of the back-breaking work and rough working conditions for men and their horses is a real eye-opener.

Once the railroad is completed, Jesse moves back to California and opens his own business driving passengers from the railroad station to their lodgings in black carriage. Of course, his trusty side-kick, Penny, is the one pulling the carriage.

Jesse is now an adult and the rest of the story is about his marriage and eventual life as a father to two middle-grade children of his own. Jesse and his family live in Omaha, Nebraska, his wife's hometown. Penny is the family horse and enjoys her job as the transporter in charge of carrying the children to school each day.

But wait! There is one more adventure in store for Jesse, his family, and Penny. This adventure involves 'Buffalo Bill's Wild West Show' featuring Annie Oakley and Buffalo Bill Cody. This final section of the book is great fun and will delight readers of all ages.

I studied California history in grade school, high school, and college. I still enjoy visiting history museums and historical sites throughout the Northern California region. I found the author's depiction of life in California during the above time period to be accurate and realistic.