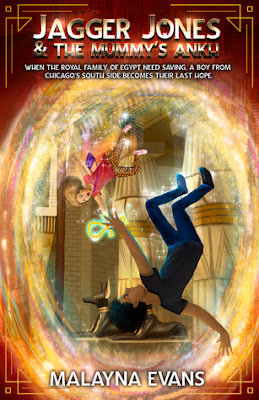 
ABOUT THE BOOK:
Malayna’s debut novel, Jagger Jones and the Mummy’s Ankh, features a biracial thirteen-year-old whiz kid from Chicago’s South Side traveling over 3,000 years back in time to the court of Amarna, Egypt, with his eleven-year-old sister, Aria, in tow.

Jagger, a devoted history buff, is shocked when he discovers that books don’t teach you everything there is to know. Sure he knew ancient Egyptians believed in magic, but he didn’t expect amulets that alter time and space, giant crocodiles with blood red eyes and teeth like daggers, and evil generals who want to murder the royal family and, by extension, Jagger’s own. It’s enough to make even a die-hard Egyptophile like Jagger anxious to get back to Chicago.

The series was inspired both by Malayna’s son and by her favorite ancient Egyptian blessing: ankh, wedja, seneb, which means (may you have) life, prosperity, and health. In book one, Malayna explores both modern and ancient notions of “life.” Books two and three will similarly contrast modern and ancient ideas surrounding “prosperity” and “health,” respectively. The series juxtaposes modern modes of thinking and objects with ancient artifacts, people and beliefs. But mostly … mummies!

CLICK ON THIS LINK TO READ AN EXCERPT FROM THIS BOOK 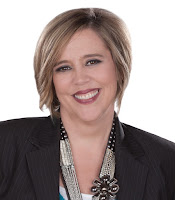 Malayna Evans spent ten years in the Chicago media market, another ten in academia, and the last decade as an entrepreneur. Years after earning her Ph.D. in Egyptology from the University of Chicago, her son, then nine, suggested she write a story about a kid, who looked like him, lost in ancient Egypt.

Excited both by the idea of sharing her passion for ancient history with today’s middle graders and pursuing her dream of becoming a published author, she jumped into the project with abandon. Her debut novel, Jagger Jones and the Mummy’s Ankh, was released in May, 2019.

A single mom with two kids, one rescue dog, and a hamster, Malayna lives in Oak Park, IL. She spends much of her time writing–and balancing her writing with kids and career–but she’s “mature” enough to have wandered through Havana with her kids, shopped the souks of Bangkok and Istanbul, eaten her way through Italy, enjoyed deep sea diving in Bermuda, and, of course, trekked the ruins of Egypt.

CONNECT WITH THE AUTHOR:
Malayna loves meeting new people, so reach out to her on Twitter, Instagram, or Goodreads or visit her at www.malaynaevans.com

MY THOUGHTS:
In keeping with my policy of being transparent on this blog, I will admit that the first thing I did before I began reading this book was to search for the definition of 'ankh' because I had absolutely no idea what it was or what it meant.
ankh
/äNGk/
noun
noun: ankh; plural noun: ankhs

an object or design resembling a cross but having a loop instead of the top arm, used in ancient Egypt as a symbol of life.


Once I understood what the title meant, I was ready to delve into reading the book.

Combine a multi-dimensional main character, time travel, adventure, Egyptology, and some snappy dialogue and you have this appealing, action-packed story.

Follow 13-year-old Jagger Jones and his 11-year old sister, Aria, on their adventures in ancient Egypt. With strong character development and unique settings, this fast-paced story will appeal to upper-middle-grade and tween readers who enjoy a mix of current lingo and historical surroundings.

The cover art and the illustrations complement the story well and will enrich the reader's understanding of the action occuring on the page.

Note from blogger: I was given access to a digital copy of this book by the publisher. I was not compensated in any way to read this book, write this review, or post this review on my blog or any other site.