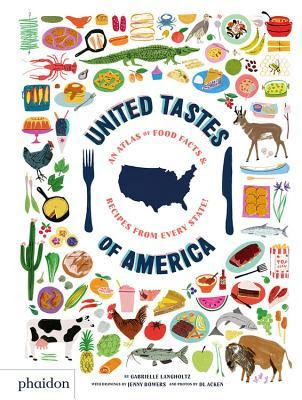 Cook around the country with this geographical collection of authentic recipes from each of the USA's 50 states, plus three territories, and the nation's capital.

Following the success of America: The Cookbook, author (and mother) Gabrielle Langholtz has curated 54 child-friendly recipes – one for each state, plus Washington D.C. and three U.S. territories (Guam, Puerto Rico, and the U.S. Virgin Islands). From Pennsylvania Dutch pretzels to Louisiana gumbo, Oklahoma fry bread to Virginia peanut soup, each recipe is made simple by a step-by-step format and a full-color photograph of the finished dish. A full-spread introduction to each state/territory features background about its culinary culture, brought to life with illustrated food facts and maps. Informative and delicious for kids and their families! Ages 7-10

MY THOUGHTS:
I had a blast reading through this oversized book! It is like an 'I Spy' of food, traditions/customs, geographic trivia, and recipes. As you may have guessed from the cover, the drawings are colorful and detailed.

Following her informative and inviting introduction, the Author launches into educating readers about everything to do with working in the kitchen beginning with front matter sections entitled, 'Cooking Tips', 'Nine Terms to Know', 'Cooking How-To's', 'Kitchen Tools' {includes outline drawings of each tool and a glossary-style description of each tool}, and a colorful map of the United States of America.

Once you turn the page to get into the 'meat' {please pardon the pun 🤭} of the text, the real fun begins!

Each state and territory is featured with a narrative about its food, history, cultural history, and community activities. For instance, Alabama is first and the author includes facts about the civil rights movement of the 1950s and 1960s. She shares that during the voting rights marches of 1965, local cooks hosted social activists such as Martin Luther King, Jr., by serving local favorites such as 'biscuits, fried chicken, turnip greens, and black-eyed peas.' (page 16)

The facing page of each section shows a color map of the state with the capital marked and labeled along with several drawings of popular foods/dishes representative of the state. On the next page is a user-friendly recipe for a dish from the state. Finally, a full-sized color photo of the prepared dish is shown.

I learned so much from this book! Here are some of my favorite facts:

The back matter includes an Index, Recipe Notes, Measurement Notes, and Note on Safety.

I could go on and on about this book's entertainment and educational value, but I think you get the picture.

Highly-recommended for classrooms, libraries, and families who like to cook and learn together.

I borrowed this book from the 'new' book non-fiction shelf in the children's section of the local public library.