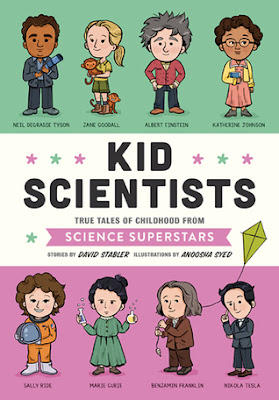 
With the best elements of KID PRESIDENTS, KID ATHLETES, KID ARTISTS, and KID AUTHORS--colorful illustrations, kid-relatable subjects, and real stories of childhood conflict, comedy, and triumph--KID SCIENTISTS tells true tales from the childhoods of a wide range of the world's most brilliant scientists before they were famous.

Did you know:
Jane Goodall, who would become the world's foremost expect on chimpanzees, had a stuffed chimpanzee named Jubliee as a child. She loved animals so much that she was constantly bringing them inside--including worms and snails--much to her mother's horror!

Although he would one day become a brilliant theoretical physicist, Stephen Hawking hated school as a child, and spent his free time assembling model airplanes, inventing board games, and even building his own computer.

Neil DeGrasse Tyson, who became a famous astrophysicist, ran a dog-walking business after school to save up money for a telescope, which he used to observe the skies from the roof of his family's apartment building.

With Anoosha Syed's whimsical illustrations bringing every caper, scrape, and sticky situation to life, this book is a fun and approachable introduction to the giants of the scientific world.

MY THOUGHTS:
This volume is a collection of short biographies of famous scientists—with a twist! The biographies are focused on how these ground-breaking scientists behaved and learned as children. Readers learn details about the featured individuals' educations, inspirations, gifts, strengths, and weaknesses.

I will admit that I had never heard of many of these individuals, and that is why I loved this book so much. I learned about people who truly made a positive impact on our world through their study of and innovations in science and math.

One thing I noticed as I read through the biographies was that several of the featured individuals were not considered to be ground-shakers as children. Albert Einstein did not speak until he was ready, and his parents feared something was wrong with him because his speech was so delayed. He had a terrible temper and a rebellious streak.

Stephen Hawking did not learn to read until he was eight years old. He hated school, but he always enjoyed learning on his own.

Temple Grandin did not speak until age four, and was eventually diagnosed as being autistic. Her mother spent time with each day reading aloud from The Wizard of Oz. Temple was entranced by the illustrations and soon began reading entire paragraphs independently.

One thing all of the featured scientists had in common was that they had someone special in their lives who nurtured their curiosity and their love of discovery. This encouraging, nurturing, even mentoring caused these individuals to go far.

Another element of this book which I particularly enjoyed was the diversity of the included scientists and mathematicians. Women and men, a variety races and cultures and religions, people from around the world--this book shines a light on the accomplishments of many diverse people with well-deserved respect and admiration.

Highly-recommended to classroom teachers, librarians, parents/grandparents, youth group/science club leaders, and lifelong learners who want to learn something new about these ground-breaking scientists from around the world.

I borrowed this book from the local public library's non-fiction section in the children's collection. 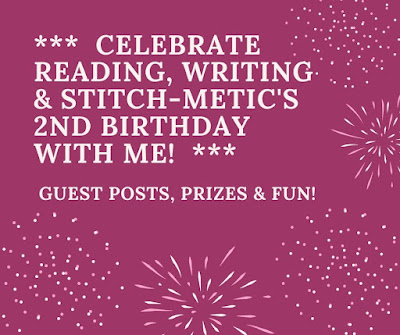