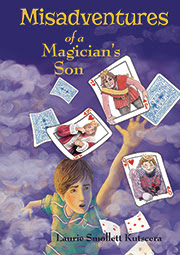 Twelve-year-old Alex was taught illusion by the best.
MISADVENTURES OF A MAGICIAN’S SON is the story of Alexander Finn’s personal journey dealing with the death of his father, a celebrated magician, and the extraordinary gift he left behind.

Uprooted from his childhood home for the seemingly hokey town of Orchard, Maine, Alex refuses to unpack and wants nothing to do with his new surroundings. But when he discovers an unusual deck of animated cards tucked in the back of his father’s old desk, things begin to unravel and Alex’s true adventure begins.

EXCERPT:
It was, at most, a forty-minute walk along the main road to the steps of the schoolhouse. But Alex, curious to see beyond the limits of Orchard, decided on a different route that morning. He wound his way through the backstreets of ivy-covered stone walls and red clapboard cottages. He walked by the docks where fishermen dressed in rubbery yellow overalls unloaded their lobster traps. He climbed the steps of the narrow railroad overpass and waited for the trains to rush beneath him. Standing there, the wind whipping through his hair high above the ochre and crimson treetops, he imagined he was soaring—back to Ridge Park, back to his friends, back to the life he knew. 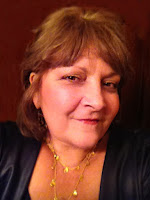 Laurie Smollett Kutscera was born in Greenwich Village and grew up in Queens, NY. Raised in an eclectic environment, (her mother, originally a vocalist in a big band, became an artist and photographer), Laurie turned to art, studying fine art and children’s book illustration at Queens College, CUNY with Caldecott medalist Marvin Bileck.

She became an award-winning graphic designer and illustrator in the field of publishing and the performing arts, and took great pleasure in designing an unusual array of critters for the toy industry.

Prior to writing and illustrating MISADVENTURES OF A MAGICIAN’S SON, Laurie illustrated RAVITA AND THE LAND OF UNKNOWN SHADOWS, for Rizzoli Books in NY.

An adventurer at heart, Laurie has cruised the eastern seaboard from Nantucket to the Virgin Islands in an 85ft. classic wooden boat. It was then that her passion for writing began as a way to chronicle the ever-changing landscape. She continues to write and illustrate and is currently working on several contemporary picture books and middle-grade novels.

Laurie lives on the north shore of Long Island with her husband, Nick, and rescue doggie, Cody. 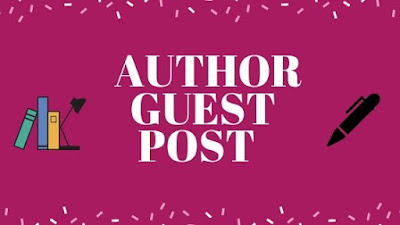 One of the things I love most about Alexander Finn is that he is both vulnerable yet fiercely determined. Not only must he come to terms with the death of his father, and what that kind of loss means, but he must dig deep within in order to survive. Middle grade is all about self-discovery, and while much of his journey is filled with turmoil and adventure, he must find a way to push his limitations, in order to succeed.

1. The story behind Alexander Finn, while filled with magic and adventure, also has its roots in my childhood growing up in Queens, NY. We moved from a garden apartment where there was always an abundance of kids to play with, to a quiet street on the other side of town. It was not only a different world but a difficult one in which to make friends. Making matters worse, I had to transition from a school bus that picked me up right outside my apartment door, to now having to walk to school. This in itself created a challenge as I was on my own, and more interested in exploring the lay of the land and searching for secret passageways rather than showing up to class on time.

2. Just like Alex’s Mr. Schnitzer, my 4th grade teacher scolded me relentlessly in front of the students whenever I came to class late.

3. As a child, I was not a great reader. Instead, I would get lost in the illustrations. (I’m sure that had a lot to do with me starting out as an illustrator.)

4. The idea for MISADVENTURES OF A MAGICIAN’S SON came to me when I was sitting in a movie theater. As the opening credits appeared, these large playing cards jumped on the screen. I was totally mesmerized—there was something very appealing about their graphic nature. I asked myself, what if they were real people? What kind of personalities would they have? What type of adventures might they have encountered? That’s where it all started. The next morning, I jumped out of bed and began writing about a cast of unusual characters that would find their way into Alexander Finn’s heart!

5. The first draft of Misadventures was written as a picture book.

6. Because of my seasonal business, the book took 10 years to complete.

7. Two of our first mates posed as Theo and Mr. Raymond.

8. Joker's snarky character was based on a very self-centered chef I worked with.

9. The model I used for Joker is a very dear friend who was born in England and lives up in the Adirondacks. Unlike Joker, Chris is charming and brilliant and was unbelievably patient as I took photo after photo of him. 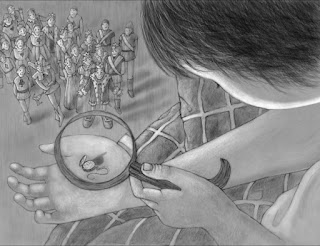 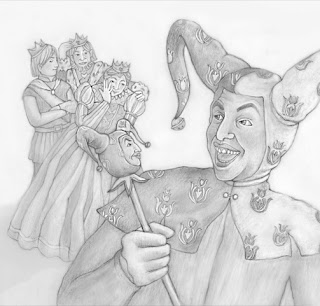 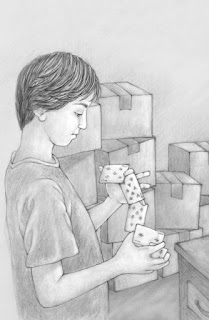 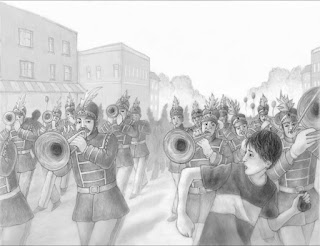