~ MEMPHIS, MARTIN, AND THE MOUNTAINTOP ~ 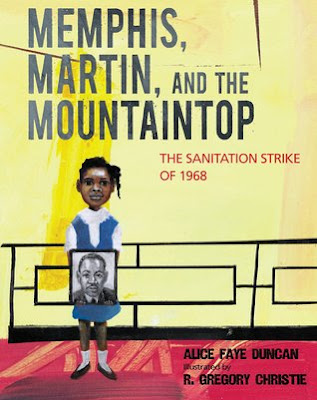 
This historical fiction picture book presents the story of nine-year-old Lorraine Jackson, who in 1968 witnessed the Memphis sanitation strike--Dr. Martin Luther King Jr.'s final stand for justice before his assassination--when her father, a sanitation worker, participated in the protest.

In February 1968, two African American sanitation workers were killed by unsafe equipment in Memphis, Tennessee. Outraged at the city's refusal to recognize a labor union that would fight for higher pay and safer working conditions, sanitation workers went on strike. The strike lasted two months, during which Dr. Martin Luther King Jr. was called to help with the protests. While his presence was greatly inspiring to the community, this unfortunately would be his last stand for justice. He was assassinated in his Memphis hotel the day after delivering his "I've Been to the Mountaintop" sermon in Mason Temple Church. Inspired by the memories of a teacher who participated in the strike as a child, author Alice Faye Duncan reveals the story of the Memphis sanitation strike from the perspective of a young girl with a riveting combination of poetry and prose.


On the author's website you will find information about her books along with a set of lesson plans designed for several of her books.
Bonus Content:
Here is a link to a movie of 'Memphis, Martin, and the Mountaintop' made by the Memphis Public Library.


R. Gregory Christie received a Caldecott Honor for his illustrations in Freedom in Congo Square, written by Carole Boston Weatherford. He is a three-time recipient of The New York Times’s 10 Best Illustrated Children’s Books of the Year Award, a six-time recipient of the Coretta Scott King Honor Award in Illustration, and a winner of the Boston Globe­–Horn Book Award, the NAACP’s Image Award, and the Once Upon a World Children’s Book Award from the Museum of Tolerance. Visit Mr. Christie’s website at Gas-Art.com.

MY THOUGHTS:
I was thrilled when I saw this title come up in our library's online catalog. Late last year we watched an American Experience show on PBS about Martin Luther King, Jr.'s visit to Memphis in April, 1968. I learned so much from the documentary, and I was anxious to read this book to see how this tragic event was handled in a book written for children.

The main character, nine-year-old Lorraine Jackson, is based upon a teacher in Memphis who participated in the 1968 Memphis Sanitation Strike with her parents when she was a child.

The conflict began in January, 1968, when two black sanitation workers were killed by a malfunctioning packer blade on an old and poorly-maintained garbage truck. Echol Cole and Robert Walker worked with Lorraine's father.

$1.70 per hour -- this was the average pay of a Memphis sanitation worker. The workers formed a labor union with the hope of gaining better pay, better treatment on the job, and improved safety. Memphis's mayor, Henry Loeb, would not grant a pay increase, and he refused to acknowledge the workers' labor union.

Beginning on February 12, 1968, and lasting for sixty-five days, 1,300 men went on strike. They marched to City Hall carrying signs. The workers and their families sacrificed greatly during this strike. A group of preachers in Memphis organized and used church donations to help the striking workers pay their bills. "The NAACP organized boycotts to support the strike." (page 9)

The workers attended rallies each night. They sang freedom songs and listened to preachers. "The mayor railed NO! to every labor request, and my daddy kept right on marching." (page 11)

The excitement described by the narrator, nine-year-old Lorraine, when it was announced that Martin Luther King, Jr., would be traveling to Memphis in March to try to assist in the sanitation workers' cause was palpable. When Dr. King arrived on March 18th, he preached, and then made a plan to march with the workers on March 22nd. Except the march didn't happen that day because an unusual amount of sixteen inches of snow fell in Memphis.

The march was rescheduled for March 28th on Beale Street. Six thousand women, men, and children attended. Unfortunately, instead of a peaceful march, some militant individuals created a riot. In response, Mayor Loeb called in four thousand National Guard troops and set a 7:00PM curfew.

Dr. King left Memphis, but he promised to return . . .  Dr. King did return to the city on April 3rd. He spoke to the sanitation workers with passion that evening. The next day, Dr. King was assassinated by James Earl Ray on the balcony of the Lorraine Motel.

The final chapters of the book are about Mrs. Coretta Scott King and the termination of the Memphis Sanitation Strike on April 16, 1968. The book includes several poems.

Back Matter includes a detailed 'Memphis Sanitation Strike--1968--Timeline', information about the National Civil Rights Museum at the Lorraine Motel, Sources, and Source Notes.

Words cannot express the profound affect this book had on me. Its poignant retelling of this part of our nation's history is powerful. The author's well-chosen words are fully-supported by the illustrator's beautiful paintings.

Highly-recommended to teachers, librarians, and families. This book will open up important discussions about civil rights, respect, tolerance, perseverance, and determination. 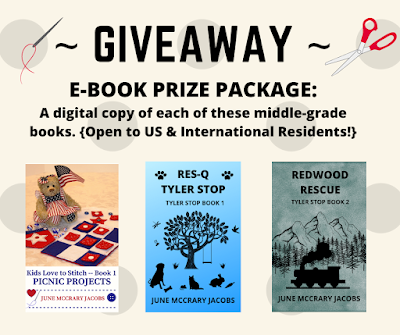