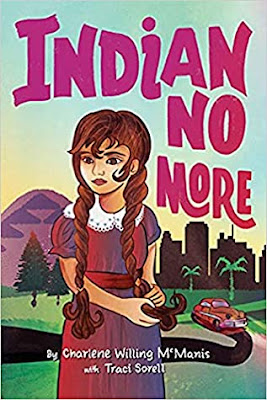 ABOUT THE BOOK:
Regina Petit's family has always been Umpqua, and living on the Grand Ronde reservation is all ten-year-old Regina has ever known. Her biggest worry is that Sasquatch may actually exist out in the forest. But when the federal government signs a bill into law that says Regina's tribe no longer exists, Regina becomes "Indian no more" overnight--even though she was given a number by the Bureau of Indian Affairs that counted her as Indian, even though she lives with her tribe and practices tribal customs, and even though her ancestors were Indian for countless generations.

With no good jobs available in Oregon, Regina's father signs the family up for the Indian Relocation program and moves them to Los Angeles. Regina finds a whole new world in her neighborhood on 58th Place. She's never met kids of other races, and they've never met a real Indian. For the first time in her life, Regina comes face to face with the viciousness of racism, personally and toward her new friends.

Meanwhile, her father believes that if he works hard, their family will be treated just like white Americans. But it's not that easy. It's 1957 during the Civil Rights Era. The family struggles without their tribal community and land. At least Regina has her grandmother, Chich, and her stories. At least they are all together.

In this moving middle-grade novel drawing upon Umpqua author Charlene Willing McManis's own tribal history, Regina must find out: Who is Regina Petit? Is she Indian? Is she American? And will she and her family ever be okay?

ABOUT THE AUTHORS:
The late Charlene Willing McManis (1953-2018) was born in Portland, Oregon, and grew up in Los Angeles. She was of Umpqua tribal heritage and enrolled in the Confederated Tribes of Grand Ronde. Charlene served in the U.S. Navy and later received her Bachelor’s degree in Native American Education. She lived with her family in Vermont and served on that state’s Commission on Native American Affairs. In 2016, Charlene received a mentorship with award-winning poet and author Margarita Engle through We Need Diverse Books. That manuscript became the novel Indian No More, which is based on her family’s experiences after their tribe was terminated in 1954. She passed away in 2018, knowing that her friend Traci Sorell would complete the revisions Charlene was unable to finish.
---------------------
Traci Sorell writes poems as well as fiction and nonfiction works for children and teens featuring contemporary characters and compelling biographies—the type of books she sought out in her school and public libraries as a child.

Her debut fiction picture book, At the Mountain's Base, is illustrated by Weshoyot Alvitre and published by Kokila/Penguin.

Traci is an enrolled citizen of the Cherokee Nation. She grew up in northeastern Oklahoma, where her tribe is located and her relatives still live. Find out more about Traci at www.tracisorell.com.

TEACHING RESOURCES FOR 'INDIAN NO MORE'

LEARN MORE ABOUT THE SYMBOLISM OF THE BOOK'S COVER

MY THOUGHTS:
This moving story, based upon Author Charlene Willing McManis's childhood, reminded me of how I felt after reading Author Lauren Wolk's 'Wolf Hollow' and Author Kirby Larson's 'Dash'. These stories all remained on my mind for a long time after I finished reading them because they are so powerful . . .

'Indian No More' describes, in great detail, events in American history which I knew nothing about prior to picking up this book.

In 1954, President Eisenhower signed Public Law 588. "The law said the government didn't need to provide for our education, health care, of anything else as promised in the treaties. The government declared us only Americans now instead of our own nation. We didn't need a reservation anymore." (page 20)

In 1956, Congress passed the Indian Relocation Act. "This removed many more Native people from their reservation homelands and relocated them to big cities like Chicago, Minneapolos, Denver, San Francisco, and Los Angeles. The government promised moving costs, jobs, higher education, and housing." (page 180)

The Petit family in the story moved to Los Angeles. They moved into a diverse neighborhood with black and Cuban families. I shed tears at the many ways in which these diverse groups were treated unfairly and unkindly in the community, in the schools, and in society, in general.

One of the uplifting scenes in the book that I could personally relate to was when Regina's grandmother taught her to sew. They worked together from start to finish on remaking a man's jacket into a jacket for one of the neighbor boys. Regina's grandmother taught her how to draft patterns, cut out the fabric pieces, sew the garment together using their Singer sewing machine, and then handsew the finishing touches.

This brought back so many happy memories of my Grandma McCrary and I sewing together in the summer before I began sixth grade. Grandma shared all of her knowledge and expertise with me, but I know I enjoyed the love and time she shared with me even more.

There are so many layers to this book. There is the historical perspective of what the government did and effect it had upon these native peoples. There are the feelings of prejudice experienced by these diverse groups. Most importantly, since the story is told by an eight-year-old girl, we are given the insight of the magnitude of these two laws and the ensuing events they caused from the perspective of an innocent child.

I highly-recommend this book to children and adults. This book would make a great classroom or family read-aloud. Many events in the story will require open discussion about sensitive topics. There are a lot of emotions and issues to digest, but I felt richly-rewarded by having read this book.