~ REVELL READS A LIFE ONCE DREAMED ~ 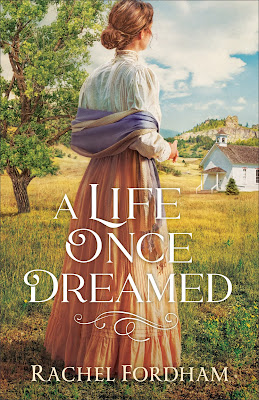 
Where you come from matters far less than where you're going
Six years ago, a shocking secret sent Agnes Pratt running in search of a new start. She found it in Penance, a rugged town of miners and lumberjacks in the Dakota Territory. In the shadow of the Black Hills, she became Miss Aggie, respected schoolteacher and confirmed old maid--despite being only twenty-four. But the past has a way of catching up with people.

When childhood friend and former sweetheart James Harris accepts a position as the town doctor, Aggie's pleasantly predictable days suddenly become anything but. James wants to know why Agnes left behind the life they had dreamed of creating for themselves--but he is precisely the one person who can never know.
Can a healing light be shed on the past? Or will the secret Agnes can't seem to outrun destroy her chance at happiness?

PRAISE FOR THE BOOK:


"Rachel Fordham has crafted a tender tale of compassion and grace that authentically depicts a mother's heart and touches on questions of family and identity and the nature of real love." -- Carolyn Miller, award-winning author of the Regency Brides series


LINK TO EXCERPT COURTESY OF THE PUBLISHER

Rachel Fordham is the author of The Hope of Azure Springs and Yours Truly, Thomas. She started writing when her children began begging her for stories at night. She'd pull a book from the shelf, but they'd insist she make one up. Finally, she paired her love of good stories with her love of writing and hasn't stopped since. She lives with her husband and children on an island in the state of Washington.

This story is set in the Dakota Territory beginning in the mid-1870s. Eighteen-year-old Agnes Pratt has left her warm, loving home in Buffalo, New York, to take a job as a schoolteacher in the small town of Penance. For reasons known to her parents, Agnes flees the only life she's ever known to venture out on her own and to support herself by teaching in a one-room schoolhouse.

The supporting characters in the story, particularly Aggie's friend, Hannah, are amazing women. They work hard to put food on the table for their families, raise their children, and reach out to their friends and neighbors in times of crisis and need. The citizens of this small town pull together on many occasions to make a positive difference for members of their community as well as newcomers to their town.

Aggie's best friend from Buffalo, James Harris, arrives on the scene to become the town's physician. The two have not seen each other or communicated for six years, and there are many awkward scenes between the two of them as they try to redefine the boundaries and guidelines for their new relationship. Many misunderstandings ensue throughout the novel because of Aggie's reluctance to open up to James about why she left her Buffalo home in the first place.

The book includes a strong Christian faith thread throughout the entire story. Prayer is mentioned frequently and is practiced by the lead character on many occasions. I appreciated the manner in which Aggie felt that certain events which occurred in her life were God's way of calling her to act on His behalf in situations involving other individuals, including babies and children. Aggie was a loving, kind, compassionate woman whom I would be pleased to have as my friend. She was accepting of people's differences in a manner in which many people in the town and during that time period were not.

When I reached the end of the story, I was delighted to read the Epilogue which gave us a peek into the lives of the main characters eleven years on. I felt that the Discussion Questions included at the end of the book were high-quality and would lead to many valuable interactions to a book group.

I recommend this book for fans of Christian fiction, Christian historical fiction, and Christian romance. 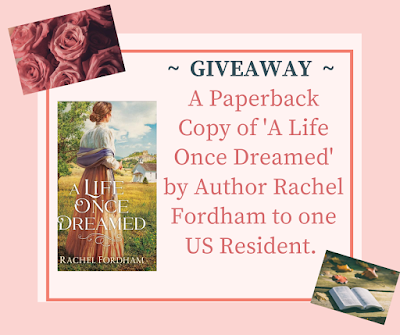 Disclosure from blogger: I received a paperback copy of this novel from the publisher in exchange for an honest review to be posted on my blog and on retailer sites and Goodreads. I received no compensation for my review or posts here or on any other site.