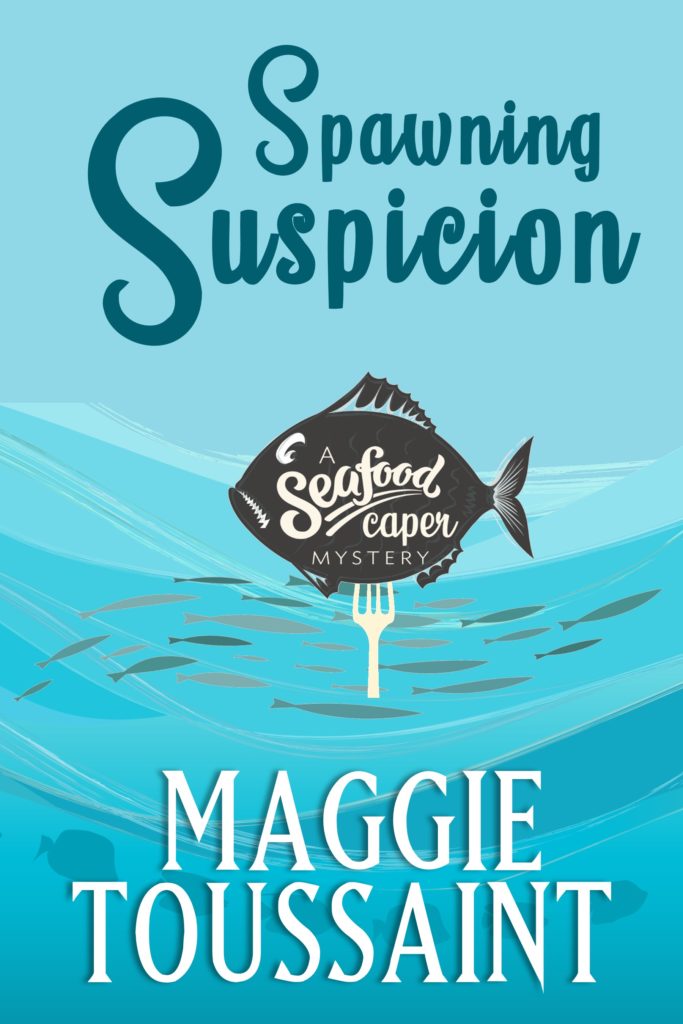 The death of island playboy Curtis Marlin doesn’t register on busy caterer River Holloway’s radar…that is, until her brother and his girlfriend are arrested for the former athlete’s murder. Certain of the pair’s innocence, the amateur sleuth sets out to investigate. Suspicion on the island spreads like chocolate sauce when River questions the victim’s teammates. The suspects don’t appreciate her stirring up trouble, but she won’t let an election-hungry sheriff make her brother a sacrificial lamb.
But there’s more than murder on River’s to-do list. A missing groom, catered banquets, and River’s own wedding plans keep her hopping like a short order cook. And as the cherry on the sundae, she has a wild kitty to tame. Under mossy oaks and rustling palmettoes, fact and fiction blend in a mouthwatering romp of good eatin’ and yummy recipes. Spawning Suspicion is the second in Toussaint’s Seafood Capers Mystery Series.
EXCERPT:

My mobile phone buzzed. I’d placed it on the console when we climbed into the van. Georgia law prevented drivers from using cell phones while driving so I used a button on the steering wheel to answer the call. “Holloway Catering. This is River Holloway. How may I help you?” My brother’s voice blasted through the car. “River, thank goodness you picked up. I’m in jail. The cops think I did something terrible, because of Viv.”

Jail? Oh, no. This couldn’t be happening. Doug’s career had traction and his girlfriend adored him. I’d known Viv Declan since we were in grade school together. “Slow down,” I said. “I don’t understand. Did they arrest you or Viv?”

“Both of us. This can’t be happening. I’ve got jobs scheduled. I can’t rot in jail. Get me out of here.”

My thoughts spun in all directions as I navigated one of Shell Island’s many traffic circles. “Do you have a lawyer?”

“I asked for a public defender, but he hasn’t arrived.”

“Should I call Mark Horton again?” We’d used that lawyer when Doug acted out after Mama died.

“But if they have you under false pretenses, he’ll set them straight. Might be worth it to have a pro at the helm.”

From the passenger seat, Pete held up a note. I read it. Ask him what the charge is.

I nodded at Pete and stared ahead at the busy two-lane road. “What happened?

I didn’t have to feign confusion. “Where?”

Curtis died in his grandmother’s house a few days ago. A former high school basketball star turned playboy, Curtis hardly worked but he’d always played hard. People orbited him, as if they could be cool through association. His bad boy charm never worked on me. Who had time to be a teenage rebel when you had to go to school and be responsible for the household’s cooking and cleaning?

“He died of natural causes,” I said.

Icy sensations feathered the nape of my neck. Oh, no. “Since when do you and Curtis hang out?”

“I knew him by name only. We saw him at the marina recently, and he invited us to come out sometime.”

My fingers tightened on the steering wheel. “You visited his house the night he died.”

Do you have a morning ritual? I love-love-love cooking any time of the day, but after I make and eat breakfast I need “me” time. That consists of reclining in a lounger on our back deck, sipping coffee, and listening to the birds chirp.

It’s a near spiritual experience, and on days when I don’t have the luxury of this private time, I feel off all day long when I skip this daily ritual. My grandmother used to say “The hurrieder I go the behinder I get.” That’s how I feel when I don’t take time to be still and breathe in fresh air every day.

You may be saying “what’s the big deal?” but it is a big deal to me. The tension seeps out of my shoulders, the list of lists in my head floats away, and there’s blessed quiet, interspersed with buzzing insects, trills and chirps of birds, a passing deer, a darting bunny, and so on. It’s all good.

As I relax into my chair and sip my coffee, scents of lush forest and briny sea breeze fill my lungs, my head, and my body. These are the scents of home, of who I am. These scents anchor me to Shell Island in an intangible way.

Some classmates wonder why I didn’t leave the island and forge my own way out in the world. I‘ve always known this was my home, this is the place where I was meant to live and die. Not that I plan on dying any time soon—I’ve got too much to do!

Anyway getting back on track, as my body relaxes and my mind relaxes, thoughts free up in my head like cartoon conversation bubbles. They float around out of context, pinballing off each other. Like now, Doug and Viv are charged with murder. Sure, they were at Curtis’s place the night he died. Sure, Viv fixed him a killer drink. Sure, three members (Heavy D, Ty, and Eggs) of that fabled high school basketball team were there before and after Doug and Viv’s brief visit. So they all had opportunity to kill Curtis.

That’s what I aim to find out, just as soon as I finish my coffee.

Are you good at finding things? 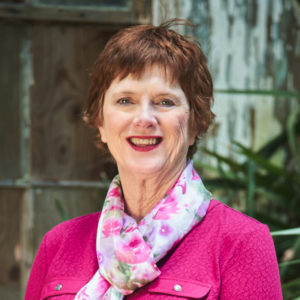 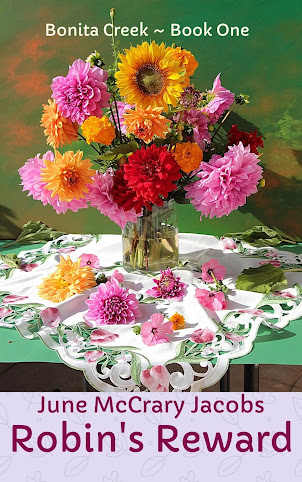