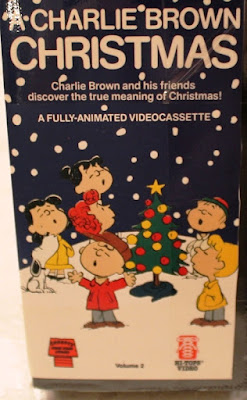 My personal collection of Peanuts® ornaments circa 1982.

December 9, 1965, was the premier airing of a unique television feature developed for children. The golden anniversary of  'A Charlie Brown Christmas' will soon be upon us, and many baby boomers have fond memories of the first time he or she watched the animated special that magical evening fifty years ago. These eager viewers had no idea they were watching a groundbreaking chapter in television history.

The anticipation of seeing a new animated feature was great in those days before videos, DVD's, video games. and computers. Baby boomers had to make a trip to a movie theater to view full-length movies, and regularly-running television cartoons such as 'Bugs Bunny,' 'Underdog,' and 'The Roadrunner and Wiley Coyote' were not in the same category as this brand new holiday special featuring the Peanuts Gang!

Coca-Cola sponsored the special which was broadcast on CBS and its affiliates at 7:30PM on Thursday, December 9, 1965. There were almost 36 million viewers, and the show was an instant success. Letters poured in to Coca-Cola's office, from adults as well as children, thanking the company for sponsoring such a well-done family show. The show would not have been created had it not been for the inspiration and creativity of the Peanuts comic strip artist, Charles M. Schulz.

Charles Monroe Schulz was born on November 26, 1922, in Minneapolis, Minnesota. Two days after his birth, he was nicknamed 'Sparky' after the racehorse 'Spark Plug' in the newspaper comic strip, 'Barney Google.' He served in the Army during World War II. In 1950, Schulz signed with United Feature Syndicate and his strip title of 'Li'l Folks' was changed to 'Peanuts'.

On October 2, 1950, the first Peanuts daily strip was run with the first Sunday strip being published on January 6, 1952. In total, 17,897 strips were fully written, drawn, and lettered entirely by Charles Schulz. (The Complete Peanuts, Introduction by Gary Groth). The final original Peanuts strip ran on Sunday, February 12, 2000. Mr. Schulz died in his sleep just hours before the Sunday papers ran this last strip.

In his book, A Charlie Brown Christmas: The Making of a Tradition, author Lee Mendelson relates the history of this innovative Christmas special. After a feature about Charles M. Schulz and the Peanuts gang was the cover story of an April 1965 issue of 'Time' Magazine, Mendelson was approached by John Allen from the McCann Erickson Agency in New York. Mr. McCann wondered if Mr. Schulz would be interested in producing a half-hour Christmas television special for Coca-Cola. (A Charlie Brown Christmas: The Making of a Tradition, page 14) Up until this time, Mr. Schulz had hesitated to allow his comic strip characters to be used in this other medium. Therefore, this would be the first time the Peanuts characters would be animated.

In response to learning of the proposal, Mr. Schulz was very specific about which elements he wanted to include—if he agreed to the project. This would be the first Peanuts television special, and Mr. Schulz wanted the show to include the true meaning of Christmas. During their discussion, Mr. Schulz stated, "If we're going to do a Christmas show, then we ought to talk about the true meaning of Christmas . . . maybe have Linus read something from the Bible." (page xii in Forward by Bill Melendez). This idea came to fruition with Linus's recitation of the Christmas story from the Gospel according to St. Luke toward the end of the special.

The remaining requirements placed on the table by Mr. Schulz were the inclusion of scenes with snow and skaters. There would be a Christmas play. A mix of jazz music with traditional music would comprise the score. "He wanted no exaggerated animation, such as when animals chase each other or hit each other over the head. He wanted less movement, in keeping with his daily strips." (Sparky: The Life and Art of Charles Schulz. Page 81.)

Mendelson, Schulz, and animator Bill Melendez worked diligently on a story outline as they did not have much time to submit it before the deadline set by John Allen. They heard back from Mr. Allen three weeks after their outline submission that Coca-Cola had agreed to buy the special. The corporation wanted the show ready for airing in early December, 1965. This was a tight deadline which meant the team had only a few months in which to produce the animation, voice track and musical track.

The team set to work immediately. Lee Mendelson and his wife had read Hans Christian Anderson's 'The Fir Tree' to their own children and made the suggestion that something about a tree be included in the special. Mr. Schulz agreed, "We need a Charlie Brown-like tree." Another trendsetting element, the use of children's voices instead of adults trying to sound like children, was requested by Mr. Schulz. The team auditioned dozens and dozens of youngsters for the major roles.

It was essential to Charles Schulz to have the religious aspect of Christmas included in the feature. Mr. Mendelson shares, "This show contains the Midwestern values and tastes of Charles Schulz, both religious and musical." Bill Melendez observed, "A big part of Sparky's personality comes through in 'A Charlie Brown Christmas.'

Since the production of a 1959 Ford television commercial, Bill Melendez was the only animator permitted to work with the Peanuts characters. On page 27 in the Making of a Tradition book, Mr. Mendelson explains: Ten thousand drawings are used in a half-hour of animation for a Charlie Brown special. Twelve drawings are photographed each second to give the illusion of movement. The drawings are first done in pencil, "then copied in ink on an acetate 'cel,' then painted on the reverse side." Bill Melendez and his team created all of the drawings for the Christmas special.

At Mr. Schulz's insistence, the then popular television laugh track was left out. Lastly, the team added the music composer/pianist Vince Guaraldi had created. The entire special was finished a mere week before the scheduled original broadcast date.

When the special was previewed by the network executives before the broadcast, they worried "that the show was too slow, too religious, and too subtle for the world of commercial television. With its airing they were silenced. In retrospect, it was daring." (pg. 192—Good Grief). Charles M. Schulz stood by his choices for the special quoted in David Michaelis's 2007 biography, "There will always be a market for innocence in this country." (page 346). Mr. Schulz's belief in America's wishes was confirmed on the night of the original broadcast and beyond! Lee Mendelson wrote in his 1979 book, Happy Birthday, Charlie Brown, "…it was our first show, produced back in 1965, that still seems to have the greatest impact on viewers." (page 31)

Almost half the people watching television in the United States, roughly 15.5 million households, tuned in to CBS on the evening of December 9, 1965, to watch the show. The special finished second in the national television ratings behind the long-running family Western, 'Bonanza'. (page 31) CBS representatives immediately called and ordered four more specials. In 1966, the A Charlie Brown Christmas special won an Emmy for Outstanding Children's Program (Sparky: The Life and Art of Charles Schulz, page 83), along with the George Foster Peabody Award.

Vince Guaraldi's sound track album for the television special sold over one million copies and is still one of the most popular holiday albums of all time. Mr. Schulz and his team went on to create forty-five television specials, four feature films, and eighteen Saturday morning shows.

Former curator of the Charles M. Schulz Museum in Santa Rosa, California, Jane O'Cain, related that in interviews, Mr. Schulz stated that he was proud of the ground-breaking nature of 'A Charlie Brown Christmas'. He cited using children's voices for the characters, the jazz soundtrack, including a religious theme, and the absence of a laugh track as important highlights. There was a personal side to this talented artist, too.

According to Ms. O'Cain, Mr. Schulz loved to buy gifts. She noted that as with many of us, the holiday traditions he practiced changed over time. The museum's director, Karen Johnson, mentioned in our telephone interview that Mr. Schulz loved the holidays with his five children.

Jane O'Cain reported that one of Charles Schulz's most important Christmas traditions was the annual ice show that he produced at the Redwood Empire Ice Arena in Santa Rosa from 1986 until 1999. He enjoyed being a hands-on producer, involving himself in every aspect of the show. He chose the initial themes and worked directly with these talented skaters right up to the last-minute dress rehearsal changes.

Two of the Schulz family daughters, Amy and Jill, performed in these ice shows. Amy appeared in the early shows, while Jill skated in many of the shows and even introduced in-line skating to the shows. Over the years gifted ice skaters such as Scott Hamilton, Dorothy Hamil, Robin Cousins, Toller Cranston, and Charlie Tickner participated in Mr. Schulz's show. After Mr. Schulz's death in February, 2000, the family continued presenting the ice shows until 2003.

The museum's director, Karen Johnson, mentioned in our telephone interview that Charles Schulz loved presenting this ice show because the community of Santa Rosa took the show into their hearts and made it one of their own Christmas traditions. Due to the schedule of the show's performances, the skaters were unable to return to their own homes for Christmas. Instead, they were invited to the Schulz home on Christmas Eve for dinner and a celebration. Mr. Schulz really enjoyed hosting the skaters at his home according to Ms. Johnson.

Author Lee Mendelson shares in his book, A Charlie Brown Christmas: The Making of a Tradition, that Charles Schulz once told him, "Charlie Brown is the way I am and Snoopy is the way I wish I could be." In the 2000 book, The Joy of a Peanuts Christmas—50 Years of Holiday Comics!, Charlie Brown is quoted as saying, "Christmas Eve is my favorite day of the year. It makes me feel good about everything." Well, Charlie Brown, your Christmas special makes your fans feel good, too!

In 1964 a book of Christmas sayings entitled, Christmas is Together-Time, was published by Determined Productions, Inc. of San Francisco. By 1967 the book had sold 125,000 copies. Here are a few examples of the sayings that Mr. Schulz penned for the book:

"Christmas is when you hug your little brother."

"Christmas is another box of candied fruit from your Aunt Agnes in California."

"Christmas is waiting for the grown-ups to finish eating so we can open the presents."

"Christmas is doing a little something extra for someone."

Millions of people around world feel Charles Schulz and his team definitely did 'a little something extra' for Christmas when they created 'A Charlie Brown Christmas'. Including the annual viewing of this show in the family's holiday traditions has become a part of life for many families—including mine!

Happy Golden Anniversary, Charlie Brown! Merry Christmas to the Peanuts gang. Thank you for sharing your creative gifts with us, Mr. Schulz.

Mendelson, Lee, with reflections by Bill Melendez. A Charlie Brown Christmas: The Making of a Tradition. New York: HarperResource, 2000. Print.