Welcome to the Blog Tour for Aftermath by Terri Blackstock, hosted by JustRead Publicity Tours! 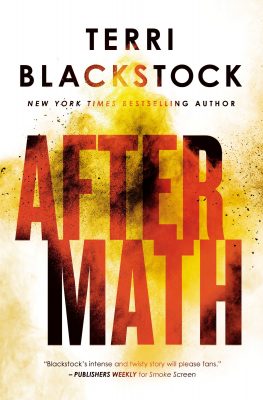 This gripping new thriller from New York Times bestselling author Terri Blackstock will leave you on the edge of your seat.
A devastating explosion.
Three best friends are at the venue just to hear their favorite band . . . but only one of them makes it out alive.
A trunk full of planted evidence.
When police stop Dustin with a warrant to search his trunk, he knows it’s just a mistake. He’s former military and owns a security firm. But he’s horrified when they find explosives, and he can’t fathom how they got there.
An attorney who will risk it all for a friend.
Criminal attorney Jamie Powell was Dustin’s best friend growing up. They haven’t spoken since he left for basic training, but she’s the first one he thinks of when he’s arrested. Jamie knows she’s putting her career on the line by defending an accused terrorist, but she’d never abandon him. Someone is framing Dustin to take the fall for shocking acts of violence . . . but why?
EXCERPT:

Taylor Reid’s phone flashed as she snapped the selfie with her two friends, their heads touching and their backs to the stage. The shot from the third row, with the lead singer in the background and the three of them in the foreground, was perfect. No one would believe their seats were so close.

They turned around to face the band, dancing to the beat of the song they’d been listening to in the car on the way to Trudeau Hall.

Taylor quickly posted the pic, typing, “Ed Loran targets nonpoliticals for his rally with band Blue Fire. Worked on us!”

She put her phone on videotape and zoomed onto the stage.

“I don’t want it to end!” Desiree said in her ear.

“Me either!” Taylor yelled over the music.

The song came to an end, and the crowd went crazy, begging for one more song before the band left the stage.

But an amplified voice filled the auditorium, cutting off the adulation. “Ladies and gentlemen, please welcome the next president of the United States, Ed Loran!”

The crowd sounded less enthusiastic as the band left the stage and Ed Loran, the Libertarian celebrity magnet, made his entrance. Taylor kept cheering and clapping, letting her enthusiasm for the band segue to him.

It happened just as the candidate took the stage. The deafening sound, like some confusing combination of gunshot and lightning bolt, a blast that blacked out the lights and knocked her to the ground. Smoke mushroomed. Screams crescendoed—shrieks of terror, wailing pain, shocking anguish . . .then sudden, gentle silence, as if she were underwater. A loud ringing in her ears filled the void.

She peered under the seats, choking for breath as dimmer lights flickered through the smoke. Even from here, she could see the fallout of whatever had happened. Blood pooling on the ground, people hunkering down as she was, feet running . . .What was happening? An explosion? A crash? She looked around and couldn’t see her friends.

She clawed her way up and looked over the seat. Smoke and fire billowed from the stage into the crowd, and heat wafted over her like some living force invading the room. Muffled, muted sounds competed with the ringing.

Get out! Now! She dropped back down and crawled under two rows of seats until she came to someone limp on the floor. She felt herself scream but couldn’t hear her own voice. Scrambling to her feet, she went to her left to get to the aisle, but her foot slipped on something wet. She grabbed the seat next to her to steady herself, then launched into the frantic crowd in the aisle. The room seemed to spin, people whizzing by, people under her, people above her, people broken and ripped and still . . .She stepped and fell, crawled and ran, tripped and kicked her way to the bottlenecked doorway, then fought her way through it.

The ringing in her ears faded as she tumbled downstairs, almost falling into the lobby below. The sound of crying, coughing, wretching, and the roaring sound of pounding feet turned up as if some divine finger had fiddled with the volume.

She set her sights on the glass doors to the outside and pushed forward, moving through people and past the security stations they’d stopped at on the way in. She made it to the door and burst out into the sunlight.

Fresh, cool air hit her like freedom, but at first her lungs rejected it like some poison meant to stop her. At the bottom of the steps, on the sidewalk, she bent over and coughed until she could breathe.

After a moment, the crowd pushed her along toward the parking garage until she remembered that her car wasn’t there. She had parked on the street, blocks away. She forced her way out of the flow of people and ran a block south. Where was it?

She turned the corner. Her car was here, on this block. Near the Atlanta Trust Bank. Wasn’t it? Or was it the next block?

Sweat slicked her skin until she found her silver Accord. There!

She ran to it and pulled her keys out of her pocket, wishing she hadn’t lost the key fob. Her hands trembled as she stuck the key into the passenger side lock and got the door open. She slipped inside on the driver’s side, locked it behind her. Instinctively, she slid down, her head hidden as if someone were coming after her.

One minute they’d been taking selfies and videotaping the band, and the next they were on the floor . . .

Where were Mara and Desiree? She hadn’t even looked for them! Should she go back for them?

No, that would be insane. She could smell the smoke and fire from here. They would know to come to the car when they got out.

She tried to steady her hands as she swiped her phone on.

“An explosion!”she cut in, her voice hoarse. “At the Ed Loran rally at Trudeau Hall!”

“Where are you now?” the woman asked in a voice that was robotically calm.

“I got out. There’s fire . . . People are still in there. Please send ambulances!”

“Ma’am, did you see what exploded?”

She heard sirens from a few blocks away and cut off the call. She raised up, looking over the dashboard for the flashing lights. She couldn’t see any, but the sirens grew louder.

She knelt on the floorboard, her knees on her floormat and her elbows on her seat, and texted Desiree.

I’m at the car. Where are you?

No answer. She switched to a recent thread with Mara and texted again.

Got out. At car waiting. Where are you?

She dictated a group text to both of them.

Are you all right?

They were probably running or deaf, fighting their way out like she had. She tried calling them, but Mara’s phone rang to voicemail. When Desiree’s phone did the same, she yelled, “Call me! I’m waiting at the car and I’m scared. Where are you?” She was sobbing when she ended the call.

A compelling drama filled with suspense, faith, romance, and surprises . . .
This is the first book written by this author which I have had the pleasure to read! As you can tell from reading the excerpt featured earlier in this post, this story literally starts off with a 'bang'.
In the aftermath of the opening chapter, chaos ensues and life in Atlanta is changed forever for the survivors of the explosion, the victim's families, criminal attorney Jamie Powell, and her client.
I have long enjoyed legal thrillers where the lead character is an attorney on a mission to discover the truth behind a crime. The author has done an excellent job of giving readers a female lead that we can trust, respect, and yes, even admire for her skill and dedication as an attorney/investigator. The manner in which Jamie Powell pulls together her defense is strategic and realistic.
The lead male character, Dustin Webb, is a stand-up guy who is a US Army veteran with a troubled past. He and Jamie were next-door neighbors and best friends when they were children and teens, so he contacts her in his time of need. From the moment of his arrest something just doesn't feel right . . .
One of my favorite threads in this story was the faith thread. The lead characters have heartfelt conversations about their faith journeys and encourage each other to become better people by sharing what they have been through as individuals.
The addition of a big lovable puppy and a young girl to the story brought a lot of laughter and fun to an otherwise tense, serious story.
I read a lot of Christian romantic suspense novels because it is one of my favorite genres. Terri Blackstock is a gifted storyteller who respects her readers' thinking skills and who deftly unravels the plot on the page in her own good time. I plan to read many more novels by this author in the future.


Highly-recommended to fans of Christian/clean suspense, thrillers, legal thrillers, and mysteries.
This book is completely clean in language and content.
I received a paperback copy of this book from the publisher through JustRead Publicity Tours. My thoughts and opinions shared here are solely my own.
⭐⭐⭐⭐⭐

Terri Blackstock has sold over seven million books worldwide and is a New York Times and USA Today bestselling author. She has had over twenty-five years of success as a novelist. She’s the author of If I Run, If I’m Found, and If I Live, as well as such series as Cape Refuge, Newpointe 911, Moonlighters, and the Restoration series. Visit her website at www.terriblackstock.com.

(3) winners will receive a print copy of Aftermath by Terri Blackstock! 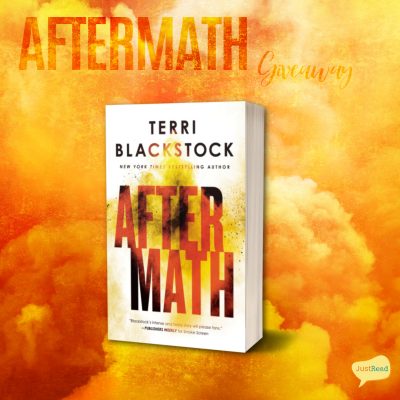 Full tour schedule linked below. Giveaway began at midnight May 11, 2021 and will last through 11:59 PM EST on May 18, 2021. Winner will be notified within 2 weeks of close of the giveaway and given 48 hours to respond or risk forfeiture of prize. US only. Void where prohibited by law or logistics.