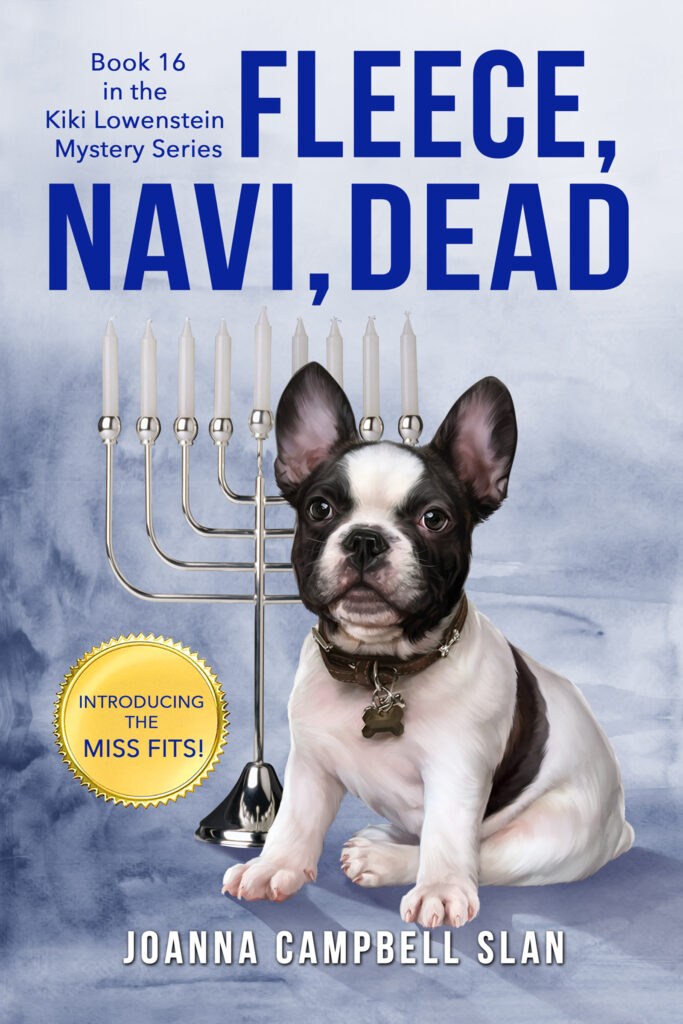 The BIGGEST Kiki book yet!

Introducing the Miss Fits, ordinary women who do extra-ordinary things! Every holiday season, Kiki Lowenstein plans 12 days of classes, her Holiday Craft Extravaganza. And every year, it nearly kills her.

This year is no exception. As the holiday season approaches, Kiki over-schedules herself and winds up running herself ragged. To make life even more stressful, she must fend off a stalker, a man determined to possess the object of his affection. But that's only one problem.

Kiki's ace full-time employee, Clancy, has HUGE decisions to make. How do you put aside your hurt and disappointment when you've been betrayed? Why should you upend your whole life because of another person's mistake? Is it selfish to think of yourself first? As Clancy ponders questions, Kiki stands on the sidelines, knowing this is not her choice to make. And yet...Kiki feels Clancy's agony.

Meanwhile, both of Kiki's older kids are having problems with teachers. Kiki wonders, "At what point does being an involved parent tip over into being a helicopter parent?" There's also a staff shortage that leaves Kiki in the lurch, both at home and at the store. Kiki might have found an answer to that dilemma when a mysterious woman applies for a job. Her name is Nona, and she claims to be an old friend of an old friend. But is she?

Nona seems too good to be true. Sadly, that might be the least of Kiki's problems with the woman. Because Nona isn't what she seems to be. Nona is a Miss Fit.

Joanna Campbell Slan is an Award-Winning, National Bestselling, and USA Today Bestselling author. Her personal essays appear in five of the New York Times Bestselling Chicken Soup for the Soul books, and one was adapted as a television segment for the PAX TV network. Joanna has penned seven scrapbooking technique books, and she has written for Creating Keepsakes, Memory Makers, and PaperKuts magazines. Joanna has traveled around the world to teach scrapbook journaling.

Joanna has also written more than 30 works of fiction. RT Reviews has called her "one of mystery's rising stars." Her first mystery in the Kiki Lowenstein Mystery Series—Paper, Scissors, Death—was shortlisted for the Agatha Award. Joanna's series featuring Charlotte Brontë's classic heroine Jane Eyre began with Death of a Schoolgirl, which won the 2013 Daphne du Maurier Award for Excellence for historical romantic suspense. As the editor and publisher of the Happy Homicides anthologies, Joanna has been on Amazon’s list of Top 100 Mystery Authors.

The Public Relations Society of America honored Joanna with a Silver Anvil (their highest award) for her work on the first FarmAid. Joanna has been accredited by PRSA as a professional public relations practitioner. She is a certified teacher of Zentangle® and certified in Personal Profiles. Slan founded the Best of British Scrapbooking and Cardmaking contest.

In her past life, Slan was a television talk show host, an adjunct professor of public relations at Illinois State University, a sought-after motivational speaker, and a corporate speechwriter. Sharing Ideas Magazine named Joanna "one of the top 25 motivational speakers in the world." She has spoken in Australia, Canada, Mexico, Europe, and all over the United States, to audiences of all sizes.