Welcome to the Blog Tour for Vanished Without a Trace by Sarah Hamaker, hosted by JustRead Publicity Tours! 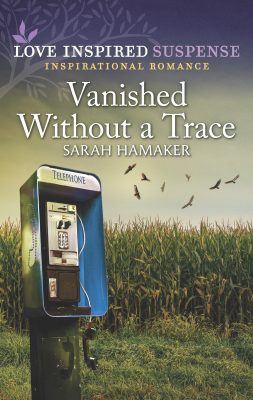 A missing person case. A new clue.
And a fight for survival.
After nine years searching for his missing sister, attorney Henderson Parker uncovers a clue that leads him to Twin Oaks, Virginia—and podcaster Elle Updike investigating the case. Partnering with the journalist is the last thing Henderson wants, until mysterious thugs make multiple attacks on both their lives. Now they’ll have to trust each other…before the suspected kidnappers make them disappear for good.
From Love Inspired Suspense: Courage. Danger. Faith.
EXCERPT:
Henderson Parker stapled the last flyer onto a telephone pole on the outskirts of Twin Oaks. Helena’s lovely face stared back at him, the mischief in her brown eyes conjuring up memories of playing hide-and-seek on Martha’s Vineyard in the summer and building snow forts in the winter. Helena had been born three months after his adoption, the two of them growing up like twins. Her disappearance weighed heavily on his shoulders. If only he’d paid more attention to her, maybe he would have had a clue as to her whereabouts.

For nine years, he’d tracked down every lead, no matter how slim, in the hope it would lead to his sister, who he’d last seen in their hometown of Buffalo, New York, outside the courthouse. Even now, he could picture her sassy wave as she’d slipped into a friend’s van and been driven away. Because Helena often went weeks without contact with her family, it had been nearly six months before they’d realized she had vanished. By the time Henderson had begun asking questions as to where she’d gone, the trail had grown cold.

Trudging back to his vehicle, he climbed in and cranked the engine. Deciding to let the AC cool off the interior before driving back to the B and B, he pulled out the photo that had driven him to Virginia. Like most small-town papers, the Twin Oaks Gazette featured the life and events of its residents. In the July 20 edition, pictures of the town’s annual Christmas in July parade graced the front page and an inside spread. One of the crowd pictures had a woman with her face half turned from the camera—the resemblance to Helena was unmistakable. His first glimmer of hope in nine long years.

Sarah Hamaker loves writing books “where the hero and heroine fall in love while running for their lives.” She’s written romantic suspense novels and nonfiction books, as well as stories in Chicken Soup for the Soul volumes. As a writers coach, her heart is encouraging writers. She’s a member of ACFW; ACFW Virginia Chapter; and Faith, Hope and Love, as well as the president of Capital Christian Writers Fellowship. Her podcast, “The Romantic Side of Suspense,” can be found wherever you listen to podcasts. Sarah lives in Virginia with her husband, four teenagers, a preschool foster child and three cats. Visit her online at: sarahhamakerfiction.com. 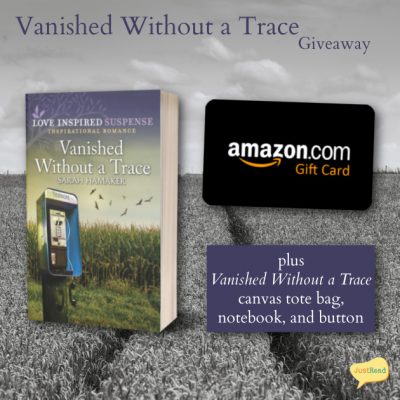 Full tour schedule linked below. Giveaway began at midnight June 27, 2022 and will last through 11:59 PM EST on July 4, 2022. Winner will be notified within 2 weeks of close of the giveaway and given 48 hours to respond or risk forfeiture of prize. US only. Void where prohibited by law or logistics.