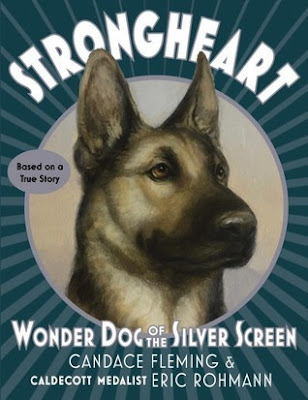 A heavily illustrated middle-grade novel based on real events about a canine movie star of the 1920s.

When movie director Larry Trimble travels to Berlin searching for his next big star -- a dog! -- he finds Etzel, a fierce, highly trained three-year-old German shepherd police dog. Larry sees past the snarls and growls and brings Etzel back to Hollywood, where he is renamed Strongheart. Along with screenwriter Jane Murfin, Larry grooms his protege to be a star of the silver screen--and he succeeds, starting with Strongheart's first film, The Love Master, which is released in 1921. Strongheart is soon joined by a leading lady, a German shepherd named Lady Julie, and becomes a sensation.

But when Strongheart is accused of attacking a girl, he must prove his innocence--and it will take his best acting skills to do so.

Review:
"With the story’s most incredible plot developments based on fact, this fascinating and heartwarming piece of historical fiction will be met with wonder."—Booklist, starred review 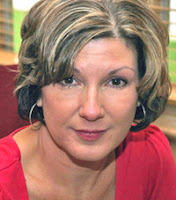 I have always been a storyteller. Even before I could write my name, I could tell a good tale. And I told them all the time. As a preschooler, I told my neighbors all about my three-legged cat named Spot. In kindergarten, I told my classmates about the ghost that lived in my attic. And in first grade I told my teacher, Miss Harbart, all about my family's trip to Paris, France.

I told such a good story that people always thought I was telling the truth. But I wasn't. I didn't have a three-legged cat or a ghost in my attic, and I'd certainly never been to Paris, France. I simply enjoyed telling a good story... and seeing my listener's reaction.

Sure, some people might have said I was a seven-year old fibber. But not my parents. Instead of calling my stories "fibs" they called them "imaginative." They encouraged me to put my stories down on paper. I did. And amazingly, once I began writing, I couldn't stop. I filled notebook after notebook with stories, poems, plays. I still have many of those notebooks. They're precious to me because they are a record of my writing life from elementary school on.

In second grade, I discovered a passion for language. I can still remember the day my teacher, Miss Johnson, held up a horn-shaped basket filled with papier-mache pumpkins and asked the class to repeat the word "cornucopia." I said it again and again, tasted the word on my lips. I tested it on my ears. That afternoon, I skipped all the way home from school chanting, "Cornucopia! Cornucopia!" From then on, I really began listening to words—to the sounds they made, and the way they were used, and how they made me feel. I longed to put them together in ways that were beautiful, and yet told a story.

As I grew, I continued to write stories. But I never really thought of becoming an author. Instead, I went to college where I discovered yet another passion—history. I didn't realize it then, but studying history is really just an extension of my love of stories. After all, some of the best stories are true ones — tales of heroism and villainy made more incredible by the fact they really happened.

After graduation, I got married and had children. I read to them a lot, and that's when I discovered the joy and music of children's books. I simply couldn't get enough of them. With my two sons in tow, I made endless trips to the library. I read stacks of books. I found myself begging, "Just one more, pleeeeease!" while my boys begged for lights-out and sleep. Then it struck me. Why not write children's books? It seemed the perfect way to combine all the things I loved: stories, musical language, history, and reading. I couldn't wait to get started.

But writing children's books is harder than it looks. For three years I wrote story after story. I sent them to publisher after publisher. And I received rejection letter after rejection letter. Still, I didn't give up. I kept trying until finally one of my stories was pulled from the slush pile and turned into a book. My career as a children's author had begun.

Eric Rohmann won the Caldecott Medal for My Friend Rabbit, and a Caldecott Honor for Time Flies. He is also the author and illustrator of Bone Dog, Clara and Asha, A Kitten Tale, and The Cinder-Eyed Cats, among other books for children. He has illustrated many other books, including Last Song, based on a poem by James Guthrie, and has created book jackets for a number of novels, including His Dark Materials, by Philip Pullman.

Rohmann was born in Riverside, Illinois in 1957. He grew up in Downers Grove, a suburb of Chicago. As a boy, he played Little League baseball, read comic books, and collected rocks and minerals, insects, leaves, and animal skulls.

Rohmann has his BS in Art and an MS in Studio Art from Illinois State University, and an MFA in Printmaking/Fine Bookmaking from Arizona State University. He also studied Anthropology and Biology. He taught printmaking, painting, and fine bookmaking at Belvoir Terrace in Massachusettes and introductory drawing, fine bookmaking, and printmaking at St. Olaf College in Minnesota. He lives in a suburb of Chicago.
MY REVIEW:

There are five little words on a book cover that instantly capture my interest. 'Based on a true story'. The book gets bonus points if it is historical fiction set between the turn of the twentieth century and the 1970s. More bonus points if it's about a horse or a dog. It's over-the-top if it is based on historical events which occurred in my home state of California. You can see where I'm going with this . . . 'Strongheart: Wonder Dog of the Silver Screen' is set in Hollywood of the early 1920s and stars an extraordinary male German shepherd who wowed movie audiences of the time.

Before finding this book on the 'New Book Shelf' in the Children's section of the local public library I had never heard of this amazing creature. After reading this entertaining and well-formatted book, I know a lot about this dog's journey from being a highly-trained police dog named Etzel in Berlin, Germany, to being a superstar in Hollywood renamed Strongheart.

I'd like to mention at the outset that there are several scenes near the beginning of the story where Etzel is physically abused by the police officers who are trying to train him. Readers are led to believe through dialogue that it is Etzel's fault he is mistreated because they just want to toughen him up for police work.

While this abuse bothered me greatly, I feel it is a teachable moment for middle-graders to learn how ignorance prevailed {and prevails} many times when people are trying to train an animal to do what the human wants the animal to do! This is an opportunity to open a discussion on the proper treatment of animals in our society.

The story takes place in Hollywood during the era of silent movies. Black and white film, no sound, placards with text on them to share information with the audience, and live music played in the theater. The illustrations by Caldecott Medalist, Eric Rohmann, contribute greatly to the ambience and mood of the book.

The illustrations are all in black and white -- replicating the silent movies. Many of Mr. Rohmann's drawings are in panels which simulate the viewing of the silent movie on a big screen. I felt the illustrator prsevented clever and entertaining artwork for readers of all ages.

Many emotions are stirred up in this novel. Sadness when a young Etzel is taken from a nurturing home shared with his mother and two litter mates. Anger at Etzel's physical abuse at the police station. Apprehension when Etzel is purchased from the German Police by Hollywood movie mogul, Larry Trimble, for the purpose of being a silent movie star. Amazement at Strongheart's natural intelligence and ability to emote or 'act' with direction in six feature films in the 1920s. Happiness when Strongheart is successful at the box office.

There are also some personal triumphs and tragedies for this canine. Joy when he meets and 'marries' his leading lady, Lady Jule. Outrage when Strongheart is wrongly accused of eating a little girl in a railroad tunnel. Happiness when Lady Jule has puppies and Strongheart finally has a family of his own again.

The back matter for this book is excellent. The author includes a several page background to the story in her 'The Truth Behind This Tale' section. There she includes the titles of Strongheart's six movies along with a link to the only movie of this star's which can be viewed today, 'The Return of Boston Blackie', produced in 1927. {The link is included for your pleasure below in my 'Fun Bonus Content' section.} There is a brief photo gallery and Bibliography included, too.

Highly-recommended for fans of animal stories, historical fiction, California history, or film history. I believe this would be a powerful read-aloud for families and classes to share together. A perfect culminating activity would be to watch 'The Return of Boston Blackie' together and later compare Strongheart's on-screen personality with what the author has portrayed in the book. Oh--and don't forget the popcorn!

-- The author included the following link in the back matter for this book. Apparently, only Strongheart's final movie, The Return of Boston Blackie, can be seen today. Click on the following link to watch the movie on youtube.com.

LINK TO 'THE RETURN OF BOSTON BLACKIE' MOVIE ON YOUTUBE.COM

-- I found this link on the author's website. This interesting interview was published in June, 2018.

-- While searching Amazon for information for this blog post I came across a book written by Lawrence Trimble, Strongheart's owner and movie producer, published back in 1926. Here's a link to that listing, if you're interested:

LINK TO AMAZON LISTING OF: 'STRONGHEART: THE STORY OF A WONDER DOG'

-- Friday, August 10th: Blog Tour Stop for the inspirational romantic suspense title, 'Darkwater Secrets', by author Robin Caroll. Post includes a book spotlight and my one-on-one interview with the author along with a giveaway. Tour organized by JustRead Publicity.

-- Wednesday, August 15th: Cover Reveal Blitz for 'When You Look at Me'. Blitz organized by JustRead Publicity.

-- Monday, August 20th: Marvelous Middle-Grade Monday Retro Fiction feature on some of my favorite Beverly Cleary books from the 1950s and 1960s.