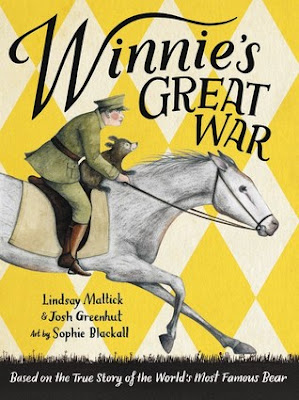 A wartime adventure unfolds through the eyes of the world’s most beloved Bear.

The story of the real bear that inspired Winnie-the-Pooh has been capturing readers’ imaginations since the publication of the Caldecott Medal award-winning picture book, Finding Winnie.
But there was so much left to be told – not just about Winnie, but about the great world events she witnessed. Now, the creative team behind the bestselling picture book has reunited to bring you Winnie’s Great War.

In a triumphant blending of deeply researched history and magnificent imagination, we follow our irrepressible Bear on her journey -- from her infancy in the woods of Ontario, to her unlikely friendship with Captain Harry Colebourn and her time as the mascot of the Second Canadian Infantry Brigade, to her experiences in wartime London before she met Christopher Robin Milne.

Told in beautifully crafted language and infused with Sophie Blackall’s irresistible renderings of an endearing bear, the book is also woven through with actual entries from Captain Harry Colebourn’s wartime diaries. The result is a one-of-kind exploration of the realities of war, the meaning of courage, and the indelible power of friendship, all told through the historic adventures of one extraordinary bear.

Lindsay Mattick is the author of Finding Winnie, a new picture book which explores her family’s unique connection to the world’s most famous bear, Winnie-the-Pooh. Born in Winnipeg, Lindsay spent her summer days collecting lucky stones on the shores of Lake Winnipeg, finding adventures in her red wagon. As the great-granddaughter of Captain Harry Colebourn, Lindsay grew up thinking of Winnie as her own ‘great-grandbear’. She has shared her family’s story as a radio documentary, spearheaded an original exhibition, and participated in Canada’s National Arts Council UK tour to commemorate WWI. After working in public relations for over a decade crafting other peoples stories, Lindsay is very excited to share one of her own. Today, she is likely still found with sand between her toes on the beaches of Toronto, her son Cole in tow, in his own Radio Flyer. Finding Winnie is Lindsay’s latest adventure and proof that dreams come true.

Sophie Blackall grew up in Australia where she learned to draw on the beach with sticks, which has not altogether helped her sense of perspective. She completed a Bachelor of Design in Sydney, which furnished her with useful Letraset, bromide and enlarger machine skills. The following few years were spent painting robotic characters for theme parks, providing the hands for a DIY television show, and writing a household hints column.

In 2000, Blackall was inveigled by New York. She convinced her husband, and two small children (who couldn't talk and had no say in the matter), to pack suitcases and sense of adventure and join the diaspora. After two months of pounding the streets, portfolio in hand, and despite the tireless efforts of her agent, the return plane ticket was cashed in to pay the rent. Just when the highlight in the day had become half a can of Budweiser at six o'clock, the fax machine coughed and spluttered and delivered a commission of nine illustrations for The New York Times.

After lots of editorial work and several animated TV commercials in the UK, the first children's book Sophie Blackall illustrated was Ruby's Wish by Shirin Yim Bridges (Chronicle), which won the Ezra Jack Keats award in 2003.

Since then, she has illustrated Meet Wild Boars by Meg Rosoff (Holt) which won the Society of Illustrators Founders Award; Summer is Summer by Phillis and David Gershator (Holt); What’s So Bad About Being an Only Child? by Cari Best (FSG); Red Butterfly by Deborah Noyes (Candlewick); Ivy and Bean (books one through five) by Annie Barrows (Chronicle); Jumpy Jack and Googily by Meg Rosoff (Holt); Wild Boars Cook by Meg Rosoff (Holt); and Wombat Walkabout by Carol Diggory Shields (Dutton).

In the rare moments that Blackall is away from her desk, she can be found in the kitchen making preposterous birthday cakes for her children or wandering the flea markets in a daze.

You know that wonderful feeling you get when you read the last page of the book, close the cover, sigh, and say to yourself "I loved this story so much I wasn't ready for it to end" ? That is exactly how I felt when I finished reading the last word of this book.

I restrained myself from ready any, and I mean not one single word, of the back matter of this book before I began reading the story. This was unusual for me because I always read the back matter {including Author's Notes, Acknowledgments, Author Bio, Glossary, Bibliographies, etc} before I start reading a story.

By willingly keeping myself uneducated about the story, I was immediately drawn into the drama and details of this delightful narrative. The story is told in the form of a mother telling her young son a bedtime story. Except this one is based on her family's history, and in particular one exceptionally, perfectly unordinary bear!

Set in Canada and Europe during World War I the story weaves fact with fiction to create an appealing, endearing, and educational story about The Great War. {The author does a nice job of distinguishing fact from fiction for young readers in a note at the end of the back matter.}

The author has entitled the back matter, 'The Colebourn Family Archive', and this section includes an author's note directed at middle-grade readers about the war, photos and bios of characters from the story {human and otherwise}, and some other ephemera pertaining to a certain Ursus Americana, 'black bear', named Winnie. The images are arranged to look like an old-time scrapbook with black photo holders on each corner of the photos and a caption beneath each photo which keeps the historical theme of the story in tact until the very end.

This is book is highly-recommended for middle-grade readers or as a family or classroom read-aloud. Fans of animal fiction, literary fiction, Canadian/European history, World War I history, and military fiction will also enjoy this well-written story.

This was definitely one of my Top Ten of middle-grade reads of 2018!

I borrowed this book from the New Book shelves in the children's section of the local public library.

ATTENTION, ALL WRITERS:  Check out my Bonus Content section below to learn some great writing tips shared in an author interview with inspirational novelist Phyllis Clark Nichols posted on 'Reading, Writing & Stitch-Metic' on Friday, November 16th. She has some great organizational tips I had not heard of previously. Enjoy . . .

Find the links to read more great Marvelous Middle-Grade Monday posts from middle-grade authors and bloggers at Greg Pattridge's 'Always in the Middle' Blog.
***********
BONUS CONTENT FOR WRITERS:
Click over to my recent blog interview with Author Phyllis Clark Nichols to learn some about some of the tools/tricks she uses to stay organized when she's writing a novel. Find the post here:   WRITING TIPS FROM PHYLLIS CLARK NICHOLS