Hello, and thanks for letting me visit your blog today! I’m here to share some little-known facts about my new book, King of Malorn. 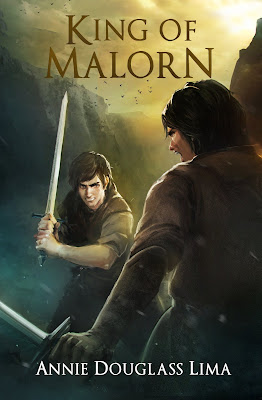 First, a few details about the book. Here’s the back-cover description:

Life as the king’s younger sister should be exciting.

Not for Princess Kalendria. She’s sick of the dissent and of constantly having her family undermined by those who think they could rule Malorn better than King Korram.

Hoping to lighten the mood in the palace, Kalendria plans a ball to celebrate her seventeenth birthday. It doesn’t hurt that their handsome Alasian ally King Jaymin has promised to attend, and she’s been waiting for him to notice her for as long as she can remember.

But unfriendly forces have their own party plans. When Kalendria, Korram, and Jaymin barely survive an assassination attempt, their only recourse is to flee into the wilderness. Tracked by unknown assassins, they must figure out whom they can trust and who is behind the plot. Can Kalendria help her brother reclaim his throne – oh, and catch Jaymin’s attention while she’s at it – before they are all killed and war destroys both kingdoms?

And now for a few details about the series it's in. (Click on the links to see each book on Amazon.)

NOTE:  This book is clean in content and language. There is some fighting, but according to the author there is no graphic violence.

King of Malorn is book 5 in the Annals of Alasia. But don't worry if you haven't read the others; it will still make sense on its own. Each of the first four books can stand on its own as well. They each deal with events surrounding the same major political incident: the invasion of the kingdom of Alasia by the neighboring kingdom of Malorn.

Prince of Alasia begins on the night of the Invasion and describes what happens to twelve-year-old Prince Jaymin after he is forced to flee for his life.

In the Enemy’s Service features a girl as the protagonist and tells the story of those who were not able to escape from the Alasian palace when the enemy invaded.

Prince of Malorn begins several months earlier and focuses on the Malornian perspective of the events leading up to the Invasion.

The Nameless Soldier shows how a young Alasian soldier lives through the Invasion but then has to survive and make a name for himself in enemy-occupied Alasia. In each of the books, main characters from the others make brief appearances and interact with each other at the point where the timeframes and settings overlap.

I also have a short ebook of “interviews” that I conducted with the characters in the other three books. Annals of Alasia: The Collected Interviews is not available on Amazon, but I send a free copy to anyone who signs up for my mailing list (to receive updates when I release new books or occasionally offer them for free). Sign up in the Rafflecopter contest form below.

And now for some behind-the-scenes facts about King of Malorn:

1.) King of Malorn will be the tenth novel I’ve published, but only the second one I actually wrote. I started drafting it after Prince of Alasia to show where the characters would be five years later, but at the time I couldn’t figure out where the story needed to go or how everything should connect. So I shelved my King of Malorn draft and went on to other books. I decided to write ones that take place at the same time as Prince of Alasia to give other characters’ perspectives on the same events. Over the seven years that it took me to write and publish the rest of the Annals of Alasia (and a few more that aren’t part of that series), I kept coming back to King of Malorn. The more I knew about what happened five years ago, the more I could do with its plotline. The two princes (now kings of their respective kingdoms) became two of the main characters, but I made sure all the heroes – and villains – of the first four books found a place between its pages.

2.) There is a character in King of Malorn who I based off of someone in one of my favorite movies, The Scarlet Pimpernel. I can’t say much more than that without giving away a spoiler, but if you’ve watched the movie, you’ll definitely recognize the character by the time you’re done with the book.

3.) I learned what a gunwale actually is (and how to pronounce it correctly!) while looking up a few details to help me write the scene where Kalendria and the others cross the Grenn River in an overloaded rowboat. (Actually, they start off in the boat, but the boat doesn’t quite make it all the way ….)

4.) One of my characters, Anya (the star of In the Enemy's Service), is an apprentice at a fine clothing store and is learning to make lace. There are a couple of brief conversations in the story where she talks with other characters about the details in a piece of lace that's part of a scarlet silk tunic. Two lines of dialogue took me about two hours of research into lace-making methods and terminology. (Of course, neither of the other characters has any idea that the painstaking designs she has worked into the lace are actually a code that Anya helped to design, and that the message spelled out in it could change the future of the kingdom … if she can convince the right person to unknowingly wear the message at the right time.)

5.) A few of my characters’ names originated as suggestions from my Facebook friends. Naming minor characters isn’t my forte, so sometimes I’ll ask for ideas on social media. A lot of my friends enjoy helping me come up with details like that for my books, and some get really into it! In this case, I needed names for some soldiers who only get mentioned once or twice. Ricker, Vann, and Saldon are now officially privates in the Malornian army.

If they sound like something you might enjoy, take a look! You can see all my books on my Amazon page at this link. Feel free to get in touch or comment on this blog post if you have any questions. My contact info is below.

Author Biography:
Annie Douglass Lima considers herself fortunate to have traveled in twenty different countries and lived in four of them. A fifth-grade teacher in her “other” life, she loves reading to her students and sparking their imaginations. Her books include science fiction, fantasy, YA action and adventure novels, a puppet script, anthologies of her students’ poetry, and Bible verse coloring and activity books. When she isn’t teaching or writing, Annie can often be found sipping spiced chai or pomegranate green tea in exotic locations, some of which exist in this world.