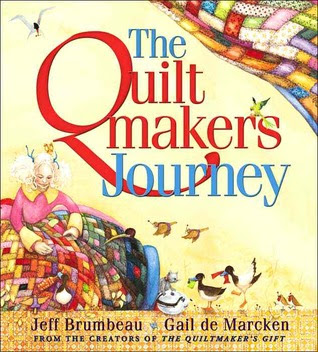 This sumptuously illustrated prequel to the beloved "The Quiltmaker's Gift" tells the story behind the quiltmaker's spirit of generosity and giving.

Escaping from the protective walls of wealth and privilege, a young girl discovers the harsh world outside, where some people don't have as much as others.

When she realizes that she has the power to help them, the young girl finds a strength and peace she never knew before. Making the loveliest quilts in all the land, the young girl decides to give them away.

Jeff Brumbeau grew up in New York City, where he lived with his mother and sister in his widowed grandmother's house. His mother worked hard to support her family, who struggled to get by. Jeff has had a variety of jobs befitting a degree in English, he says, including pumping gas, carpentry, painting, working in a mail room, car wash, factory, and candy store, on an oil rig in Wyoming and in advertising.

It was his exposure to independent, self-sufficient women early on, Jeff believes, that later inspired him to write children's books, The Man-In-The-Moon in Love and The Quiltmaker's Gift. The Quiltmaker is independent, and she has scruples. Ultimately, it is her clarity, determination, and vision that overcome the resitance and the greed of the king, and help him discover a more joyful way of living through giving.

The same is true with Miss Hunnicutt's Hat. In this tale, however, the woman starts out as timid and unsure of herself when she decides to put on a new and very unusual hat. As the day passes, though, and she continues to stand up to the townspeople, who object to her chicken hat, she becomes stronger and more sure of herself. At last she proclaims, “I have the right to wear what I like.”

Growing up, Jeff was interested in tales with a strong moral base, especially those found in eighteenth and nineteenth century children's literature. In his stories, he wanted to create the same vibrancy and ethical values that are found in the classic tales of Hans Christian Andersen and the Grimm Brothers. For The Quiltmaker's Gift, he selected the quilt as a symbol for the theme of giving and sharing, because a quuilt represents the ultimate gift. It offers both practical warmth and artistic beauty.

He lives in Chicago and Taos with Marcia, his wife; Samantha, the opera-singing Persian cat; and Louis, the daredevil alley cat.

Gail de Marcken has been lucky enough to have lived all over the world. She joined the Peace Corps in 1965, and argued her way to a posting four days upriver in Borneo, where she met another volunteer. Two years later, he called her in Minnesota and offered to carry supplies back to her teacher's college. He had just gotten a job with the Peace Corps located near the college. Three days late they got married, and she went with him back to Borneo. They had thirty of their thirty-four years together in Asia, Africa, and Eastern Europe. They have three children, and have experienced together: one war, a coup, an evacuation, ten countries (three in which they were shot at), malaria, and lots of adventures. Most recently, they lived in Latvia. Over the years, they managed to return to their beloved fifteen acres of land near Ely, Minnesota, every summer. They now live there, in paradise, full-time.

Gail has found models for her characters in the people and figures that populate her world. The inspiration for Miss Hunnicutt came from Gail's sister-in-law. A great and animated teacher, she is nicknamed Rubber Face. The name comes from the fact that she loves to make faces, and is an avid collector of rubber noses. Her students know what subject is coming, and how quiet they have to be, by watching the type of nose she is wearing. Like Miss Hunicutt, she is not a timid person.

Also, in Miss Hunnicutt's Hat, Gail was particularly interested in the portrayal of Yadda. She tried to make him appear vaguely Jewish or Middle Eastern and thus different from the others in a more important way. The boys are always sneering or shooting at him with their slingshots, but then they are impressed with his juggling skills and want to learn for themselves. Perhaps they will learn to appreciate him.

The model that she used for McSnoot was an older Peace Corps volunteer she met while serving in Lithuania. It was the volunteer's young spirit that influenced Gail to let McSnoot be the only character to change and learn. The rest of the town just copies the chicken hat that pleased the queen.

In a Latvian church near her home, Gail found a polished head that inspired her portrayal of the king in The Quiltmaker's Gift. She liked the king's head so much that she made his crown fall off a number of times so that people could see it. It is to Gail's niece that the king is reading when the Quiltmaker finds him at the end of his gift-giving travels. She also met a merry Greek woman, who became her inspiration for the Quiltmaker. They are now great friends.

** LINK TO A CLASSROOM UNIT FROM THE CENTER ON ENERGY AND ENVIRONMENTAL EDUCATION, UNIVERSITY OF NORTHERN IOWA:  https://ceee.uni.edu/sites/default/files/Education/quiltmakers_gift.pdf

MY THOUGHTS:
This picture book is another book I used in my classroom towards the end of my teaching career. I have a beautiful hardcover copy of the book given to me by one of my students because she knew how much I loved this book and how much I love to make quilts.
Besides the quilting theme and the beautiful artwork, the thing I love most about this book are the themes of generosity, compassion, and kindness exhibited by the main character throughout this story. The issue of homelessness is presented in the plot.
I have always believed that reading fiction aloud to students is a great way to teach values. This author and illustrator have worked their magic in creating a memorable 'journey' for young readers to experience good values in a far away land with fictional characters.
Highly-recommended as a read-aloud for families, classroom, church/temple groups, youth/scout/club groups, quilters, and adults who enjoy a great story enriched with outstanding artwork!
# # # # # # # # # # # # # #