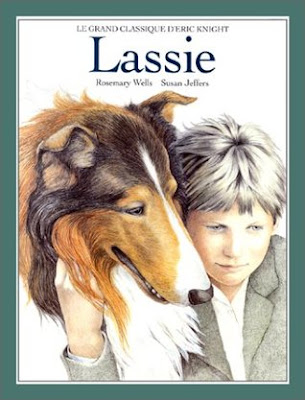 ABOUT THE BOOK:
Lassie is Joe's prize collie and constant companion. But when Joe's father loses his job, Lassie must be sold. Three times she escapes from her new owner, and three times she returns home to Joe, until finally she is taken to the remotest part of Scotland—too far a journey for any dog to make alone.

But Lassie is not just any dog.

First published in 1940, Lassie Come-Home has become one of the best-loved dog stories in the world.


ABOUT THE AUTHOR OF THIS ADAPTATION, ROSEMARY WELLS {from Goodreads}:
Rosemary Wells is the author of a number of popular children's books, most notably the Max and Ruby series which follows the everyday adventures of sibling bunnies - curious three year old Max and bossy seven year old Ruby. She gets the inspiration for Max and Ruby from her two daughters and the experiences they have with friends and school. Her West Highland Terriers Lucy and Snowy have also worked their way into her books, as McDuff and insight for other characters.

She has also written Noisy Nora, Yoko, Voyage to the Bunny Planet series, a Christmas Book called Morris's Disappearing Bag and a collected book of illustrations of Rodgers and Hammerstein songs. In April 2007, her children's book The Gulps featuring illustrations by Marc Brown was released. Also that year she published Red Moon at Sharpsburg, a historical novel featuring a young girl in the American Civil War. 2008 brings Otto Runs For President, followed by Yoko Writes Her Name, scheduled to be published in July.

Wells grew up in Red Bank, New Jersey. She is the daughter of Helen Bamberger.

ABOUT THE ORIGINAL AUTHOR, ERIC KNIGHT {from Goodreads}:
An author who is mainly notable for creating the fictional collie Lassie.

He was a native of Yorkshire in England, and had a varied career, including service in the Canadian Army during World War I and spells as an art student, newspaper reporter and Hollywood screenwriter.

His first novel was Song on Your Bugles (1936) about the working class in Northern England. As "Richard Hallas," he wrote the hardboiled genre novel You Play The Black and The Red Comes Up (1938). Knight's This Above All is considered one of the significant novels of The Second World War.

Knight and his wife Jere Knight raised collies on their farm in Pleasant Valley, Bucks County, Pennsylvania. His novel Lassie Come-Home (ISBN 0030441013) appeared in 1940. It was adapted into a movie in 1943 and has been reprinted several times since then.

In 1943, at which time he was a major in the United States Army - Special Services, Knight was killed in an air crash in Dutch Guiana (now Surinam).

--  MORE ABOUT THE AUTHOR FROM ROSEMARY WELLS'S WEBSITE, INCLUDING A VIDEO OF WELLS WORKING IN HER STUDIO MAY BE FOUND AT:
https://www.rosemarywells.com/about

--  TO VIEW SOME FULL-SIZED ILLUSTRATIONS FROM THE BOOK, CHECK OUT THE BOOK'S PAGE ON THE PUBLISHER'S WEBSITE AT:
https://us.macmillan.com/books/9780805059953

MY THOUGHTS:
I was inspired to read, or should I say 'reread', this story by an elderly collie. Let me explain. We were walking on a bayshore trail recently when a gentleman returning to the trailhead approached us. He was holding his dog's leash in his hand. I said, "Good morning."

He smiled at us and said, "Gentle old collie coming through!" Following along behind the man, at a slow pace, was a beautiful collie. The dog stopped briefly at my side and looked up at me. I smiled and softly greeted the collie with "Hello."

We all continued on our way, and I said to my walking partner, "That dog reminds me of Lassie. I used to love those stories and the TV show when I was a kid." Right then I decided to look for a Lassie book at the local public library.

This book was the only Lassie book I could find on the shelf at our branch. When I saw it was an adaptation of Eric Knight's original short story from 1938 written by one of my favorite children's authors, Rosemary Wells, I knew I wanted to read it and share it here for Marvelous Middle-Grade Monday.

The story is touching, heartwrenching, and engaging all at the same time. Susan Jeffers's delightful illustrations add even more emotional depth to the story because they depict the bond between Joe, the young protagonist, and Lassie, his family's champion dog.

Without telling Joe, his father sold Lassie to a Duke who had a kennel full of champion dogs. Joe's father had lost his job in the coal mine, and the family was in dire need of the money gained from the sale of their dog. The Duke lived three miles away from Joe's family's home.

Lassie escaped from the kennel and ran back home to Joe. The Duke's hired hand came to retrieve Lassie and took her back to the Duke's kennel. The next day, Lassie escaped again and was waiting for Joe at his school, as she was on every other school day. Joe and his father took the dog back again.

The dog escaped one more time and was reluctantly returned to the Duke. This time the Duke moved Lassie up to the mountains of Scotland, the Highlands, eight hundred miles away! The journey was a two and a half day train ride from Joe's home in Greenall Bridge in England.

The Duke's granddaughter, Priscilla, was instrumental in helping Lassie escape from bondage on the grounds of her grandfather's castle. This part of the story was pretty amazing and exciting.

The rest of the story relates Lassie's long, arduous journey through Scotland and England. She was heading home. Kind humans helped Lassie along the way by feeding her. A woman demanded the dog catchers free Lassie from a dog catcher's net. With a promise to return in one hour to take the dog to the her home, Lassie was taken to the pound temporarily.

Desperate to escape from the pound, Lassie jumped out a window twenty-feet above the cobblestone street below. She was badly injured. An elderly couple found Lassie, collapsed, on their property and nursed her back to health. They named her Bonnie.

Meanwhile, back in Greenall Bridge, Joe was adjusting to not having Lassie around. By now it had been nearly a year since Lassie had been taken to the Highlands. Lassie was fewer than one hundred miles from home, but her trials and tribulations were not over yet. There was a fight with a farm dog in which Lassie was badly injured. There was a lack of food and bad weather. She was weak and sick.

One day Lassie was lying in the schoolyard when Joe's class was dismissed. She was too weak to walk any further, so Joe carried her home. The family nursed their beloved pet back to health, but that is not the end of the story . . . You'll have to read the story for yourself to learn the entire story!

I borrowed a copy of this book from the local public library.